Don't be afraid of butter!  Are their certain ingredients you absolutely steer clear of completely?  I remember back in the day when you had to point fruit, folk didn't eat so much which was one of the reasons Weight Watchers adapted the plan to allow fruit for free, made sense because we all know it's good for us!   Is anything 'bad' for us really, or is it just the quantity that you chose to eat or drink?

Let's take butter for example, a tablespoon (15g) is 6sp, although for another point you can have 20g!  Anyway my point is OUCH, that's a lot of points, however yesterday I had that much for my lunch, oh yeah I did, brave or what!  Why?  Because I was in Sainbury's on Monday and say a bowl of veg (tenderstem broccoli, peas, kale and asparagus) with minted butter.  It was 10sp for the bowl which weighed 260g, I suppose if I'd made the bowl up myself it would've been about 8sp.  However the main thing was I would not have eaten 250g of vegetables yesterday had they not been drizzled in a delicious mint butter!  So in my opinion it was a good meal, I topped it with half a breast of garlic chicken chopped up (leftover from yesterday) and bacon medallions, so the meal was only 12sp in total.  Some people however wouldn't have picked that bowl of veg up in the first place because of the butter.  Don't be afraid of certain types of food, it's all about balance.

It was delicious, it really was; 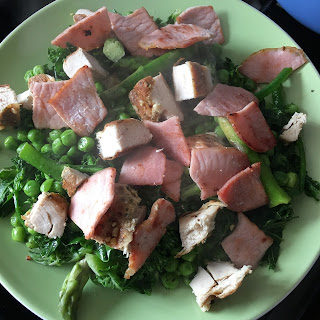 I've realised I've not been drinking enough water, the pint I pour when I get out of bed isn't going down as easy as it was, so my mission today is to make sure I drink at least 3 pints of water throughout the day, I'll be getting the water bottle out!

I also have to say I'm enjoying my fitbit again, I joined one of the challenges at the weekend, I didn't win but it did make me more aware of moving more.  It's a shame you can only have 10 people in a challenge on the fitbit app, I'm going to start a challenge in my group, I'll start a thread and everyone can post a photo of their steps at the end of the day, this can be done whether they have a fitbit or pedometer.  The challenge won't just be who's done the most but challenging the members to improve on their own totals over the week.  My bestie pointed out to me when I said she was running so more active than me, that I was doing more steps on the fitbit chart, so it doesn't have to be hard work this moving more lark, Alfie walking me and mom about is really helping me hit my 10,000 steps a day.  It's helping me not feel 'lazy' and encouraging me to move a little more at the weekends.

It can be too easy to put things on hold, take the school holidays for an example, how many moms will disappear from their meetings for the 6 weeks because they can't fit it in?  Is that the truth though, or is it just a truth that's easily to believe at this time.  Do all moms with kids off school stop coming to the meetings for the holidays? Erm no...

I know I've found excuses to not make my meetings in the past but the truth is, it sets me back, I need my meetings if I'm to have any chance of losing weight.  I might not be doing great with the weight loss but every week I'm improving and finding reasons to continue.

One of my lovely members said to me yesterday, "I've got to change my reasons for being a Weight Watcher", initially she joined to be 'thin', then to be 'healthy', neither of these reasons are important enough to her at this moment in time, so she's having a re-think about why.  I totally related to this, our reasons change as time goes by, I too need to think about my reasons, do you?

My reason this week I think is I don't want to have to look through my tshirts to find one that's baggy enough to not show my belly this summer!

On that note, I'm off to find a 'floaty' dress to wear to work today that won't show it either!  Now that should be a good enough reason surely!  We shall see.

Now have a great day BeYOUtiful, I intend too.