Eating on a budget? 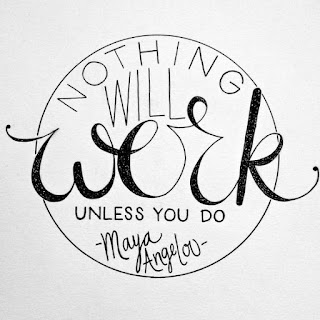 Short one this morning as I’ve got a lot to do, it was a busy day yesterday too, mom stayed in bed till lunchtime bless her she slept some too, then I spent some time with her doing crosswords and reading the papers before getting back to my paperwork. 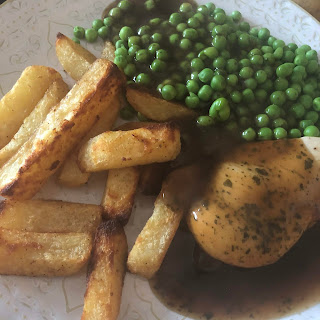 Foodwise, I enjoyed chicken, chips, peas and gravy for 18SP, that was a late lunch and I didn’t bother with tea when I got home was still fun.  I’m a little addicted to the Co-op chips, I know it’ll pass, just need to get it out of my system.

I’m going to work on a budget meal planner for 1 for a member, although I reckon a good few of my members would welcome it.  A week of cheap, healthy, Weight Watcher friendly meals to help with weight loss.  If you have any suggestions message me or comment on my post.

Omelettes, they’re filling and healthy and you can throw in any veggies you have, especially ones on the verge of walking out the fridge by themselves.

Rice and pasta dishes, as long as the portion size is good are a great, cheap option.

Meat is more expensive than beans and pulses but you can buy a whole chicken for around £3, Asda do a bag of diced chicken breast for £4, that’s 750g, so with man portions that’s at least 3 meals, worth, because it’s frozen you can just leave it until you need it.

If you have a slow cooker, throw in some chicken breasts (Asda’s frozen £5kg or 2 packs of 600g for £5), add a pack of taco seasoning (Asda’s own 80p) and a tin of tomatoes (Asda’s own 35p), leave on low for 6 hours or so and you’ll have shredded chicken at the end of it.  Once you get two forks and shred it apart anyway.  You can do this with chicken and a jar of Dolmio salsa sauce too.

I’m only using Asda as an example as it’s an easy website to navigate, Lidl’s and Aldi, or your local butchers and greengrocers may be even cheaper.

Buy what’s in season too, as that’s always cheaper.  Morrisons are doing Wonky fruit and veg which is much cheaper, let’s be honest who cares about the shape!

Anyway like I said, I haven’t got much time this morning but it’s started my brain thinking for sure, I’ll think more as the day goes by and tomorrow of course.

Frozen beef mince is much cheaper in the Asda than fresh, yes you will pay more for the 5% fat version but that’s down to you to decide if it’s worth the extra cost to save Smart Points.  Chicken or turkey breast mince would be zero Smart Points.

I really have got to go, oh what about banana pancakes, 2 eggs, 1 banana, In a bowl, mix the banana and egg together then add a pinch of salt.

Heat a nonstick frying pan over a medium heat. Mist with calorie controlled cooking spray. Drop a ladleful of the batter into the pan and swirl. Cook for 2 minutes until golden; _lip and cook for another 2 minutes. Repeat so you have 4 pancakes.  I use a Teflon pan liner, makes for a much easier cooking experience, it won’t stick to the pan, actually I might have some for breakfast, mmm.

Here’s to a great day, to thinking before we’re eating.  Healthy when hungry, happy when full of healthy food and in control.  Enjoy your Thursday, I know I will. 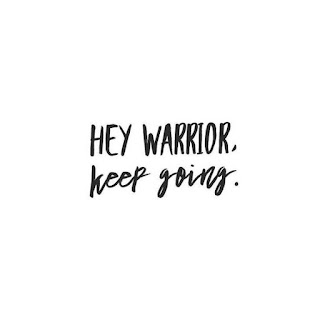 I always enjoy my meetings and yesterday was no different, there’s nothing better than making someone laugh. Actually there is, it’s having one of those people coming up to you afterwards thanking you and telling you how much they’d needed a good laugh.

Pigeons! The bane of my life right now, they poo everywhere and it’s just vile. Yesterday though one went too far, I went out and the biggest damn pigeon you’ve ever seen was sitting comfortably smack bang in the middle of my hanging basket! He’d broke on lots of the stems and flower and made a right mess. Now to get them off my garden! I’m going to stick kebab skewer in the baskets, so if they go to sit there again, it’ll spike them up the bum! Then one clever, clever member suggested a nerf gun, guess what’s arriving today :)

Anyway, I’m over the hanging basket incident now I’ve vented, of the neighbours weren’t convinced we were crazy in our house before - they do now. Moms gonna put a window through the banging to shoo them off she’s doing. I’m gonna lose my voice if I keep running up the garden and screaming at them like a maniac with Tourette’s. 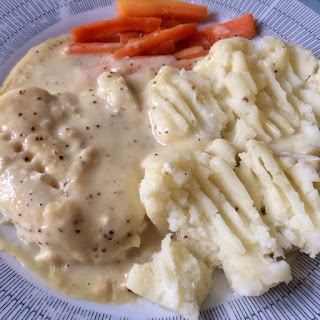 Anyway food, I enjoyed cod in honey and mustard sauce with mash and carrots for dinner, can’t beat a cooking sauce jar occasionally for convenience. Ooo I fancy WW spaghetti on toast, might have that for my breakfast, the bread that’s left isn’t fresh enough for anything other than toast. 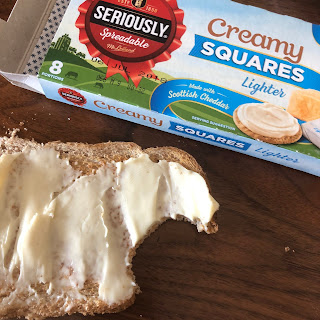 These creamy squares lighter are only 1SP and they’re delicious on a packet of WW bruschetta for a 3SP snack, I had mine on a piece of toast yesterday for lunch, I wasn’t very hungry and I picked on a few things through the afternoon.

3 square meals today is the plan. Focus more on food than pigeons I reckon. I have a couple of pieces of cooked chicken, might do a little chicken dinner with the carrots and potatoes I have left, there’s a frozen Yorkshire in the freezer too. Mmmm I do love food, this is why I stayed the same again this week. NO shame in a maintain. Bank holiday and bestie day too, I think that’s pretty good.

45 minutes later we’re back home, I’m sat drinking cold tea whilst the kettle boils and I finish this blog off.  I’m going to start my online shop for the week in a bit, online is working really well for me at the moment, I’m not safe in shops, heck I’m not safe online.  I started tidying my office yesterday, mostly because I couldn’t get in the room, so I may carry on today, maybe clear the floor in my bedroom.

Here’s to a healthy day, focus on the positives because the negatives suck and remember they’ll always be pigeon poo, you can either laugh at it or cry, I however am dealing with it with spikey wooden skewers and a nerf gun.  Don’t be a victim be a warrior not a worrier.
Posted by Bev at 8:42 am No comments: 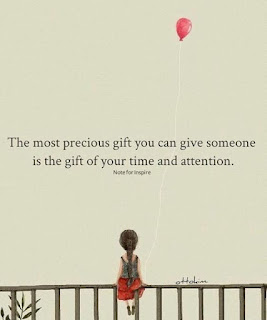 This is going to be a short one as mom woke up early and I’ve already spent half hour doing that.

There are 168 hours in a week, do you make sure you dedicate enough time to becoming a healthy and happier version of yourself?  I don’t mean just watching your eating habits or exercising, I also mean taking time to do the things you enjoy.  No spending all your time stressing over the numbers on the scales!

Mom and I spent most of the day in the garden yesterday, just chilling, doing her crosswords, generally enjoying doing nothing, see that’s what I like to do these days, have allocated time to do absolutely nothing.  By doing that, I have more energy and inclination to do the stuff I’m not so keen on, like the washing up. 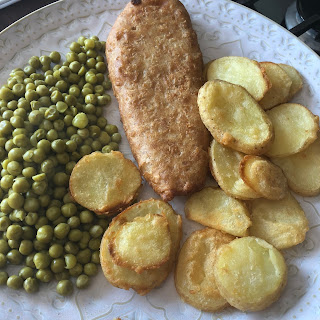 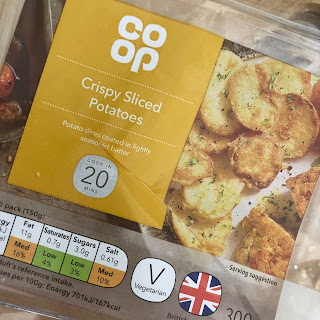 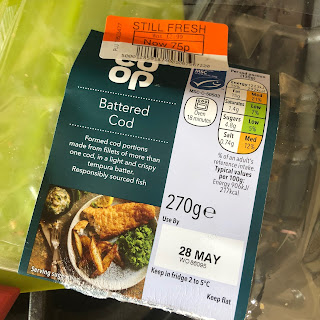 We had fish, chips (of a sort) and peas for dinner, the fish was reduced in the Co-op on the morning to 75p from £2.99, had to be done, 8SP each, the crispy sliced potatoes were the other side from the meal deal so in theory free and also 8SP for half portion.  Much less than if we had gone to the chippy.

I’ve taken the cod out the freezer, will cook that today, can’t decide what I’m doing with it though, I like the idea of a honey and mustard sauce, then have it with rice. Mmm I think that would be delicious and the one in the Co-op is 5SP for ¼ of a jar so not too bad, even with rice that’s only 9SP a portion.  I could make my own sauce but nah that’s way too much time spent in the kitchen for a working Tuesday.

Those 168 hours are precious, if you take away the working ones, including travelling time that’s taking me down to 140 thereabouts, then there’s sleep – do you make sure you get enough of that?  I’ll say a good 7-8 hours a night for me most nights, apart from them 4am mornings a few times a month, so we’ll say 50 hours, that’s taking me down to 90.  Then there’s walking the dog, that’s another max hour a day, so we’re down to 83 hours, housework, sorting mom’s meds, shopping, errands, all that stuff well if I did the housework I should, it would be a lot higher but it doesn’t leave a lot of time left does it.

Which means the precious free hours I have left, I’m doing what I want to do when I want to, I don’t plan then things I want to get done, I decide then do them when I’m in the mood.  At the moment, there’s a pile of sand waiting to be made into a beach feature, there’s no rush.  I moved a ‘too’ heavy plant pot yesterday because I’d originally put it in the wrong place and yesterday was the day I’d decided it had to be moved, bit of a dumb move as it’s pulled my shoulder a bit but meh it’ll recover.  At some point I’m going to paint the fence panels, but no rush, it’ll all get done.  I have enough things in my life that dictate my actions, I’m not adding any pressure to that at all.

That’s probably why I’m not being obsessive or hard on myself about my weight, it’s an added pressure I don’t need.  I’m eating healthy ish, I’m maintaining this weight really well, so I’m not gaining and I see so many other people putting way too much pressure on themselves and it’s not helping.  Emotional health is just as important as physical health, let’s take care of both I say.

Anyway I do need to rush now as I need to leave the house in an hour and a half and there are ‘must do’s’ to get done.   Cod in honey and mustard sauce with rice or mash and carrots, yeah that’s sounds the business don’t it.  I’ll nip into the shop on my way to work, get moms papers and a jar of sauce.  Oh what a wonderful rock and roll lifestyle I have, I love it.

Here’s to making use of your hours this week, make sure you save one for your meeting, it’ll be the best hour of your week xx