I do believe I'm improving!


30th July 2016
Believe and act as if it were impossible to fail,  Charles F Kettering 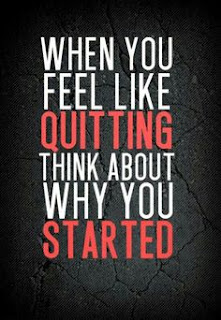 It's only bloomin Saturday and the last one in July already!  On my days, where has this month gone, it's just whizzed by.  I tried but didn't win the Workweek Hustle on the fitbit challenge, I've either come second or third, but I'm really proud because I did over 60,000 on the week, I haven't been doing that many over 7 days for months let alone 5 days.  We've started a weekend one now which might encourage me to get more active today and tomorrow rather than sitting on my behind, although I do fancy doing some sitting down, I'm a bit shattered to be honest!

Oh I almost forgot mom lost 1/2lb so only 1lb off her 100lb award and I lost 2lb, I was really pleased with that, especially as I'd eaten out twice last week and had chippy for tea Thursday, just shows doesn't it, you don't have to be perfect.  We went for a carvery for lunch yesterday, it was the worst I've ever had and I only ate the meat and yorkshire, so at least that saved me some Smart Points!

Cracking meeting last night too, now and again you get that gem of a member who makes everyone smile, and we most certainly have one of those at Essington, she had us all in stitches last night, apparently if you hold 2 digestives together, it's only 1 biscuit!

I'm going to do a bit of baking this weekend too, we've been baking Weight Watcher friendly cakes and asking for donations in the meeting to raise money for church and we're doing quite well, we all like cake but we don't want to bake lots because we'll eat lots!

A handful of us also agreed to do a paper tracker, our names have been written on them so we can't cheat and I will do it now I've made that commitment, here's to an awesome week I say, if I lose a pound I'll be in the next stone bracket, I've nearly been in that bracket a few times this year then had a bad week or month, so it's about time I did it and stopped messing about!

The walking is definitely helping, even if we're not going very fast, its good to get a bit of fresh air none the less.

I actually need to think about meals today because I haven't got anything planned, there is a joint of beef in the fridge actually, I might put that in the oven on really low and do a roast dinner, it's got to be better than what was served to us yesterday!  It can't be worse that's for sure.

Right let's start my day, got another cracking meeting this morning followed by a day with mom, not sure on our plans might try and get to Weston Park today or tomorrow to see how the archaeologists have got on with the cave.  I also want to cut down some of the shrubs up the back garden and fill the green bin - more rock and roll lifestyle right there!

Have a great weekend BeYOUtiful, stay healthy and happy xx