You know what rhymes with Friday - Alcohol! 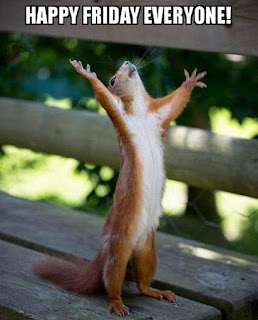 I did have a good day yesterday, there were tears but I blame Grey's Anatomy and Station 19 for that!   Bailey's mom had dementia and her words and feelings about it all were just so poignant and a little too soon, then it carried on into Station 19, but in that there was also unbelievable racism that just made me so angry and sad that such people live in this world.   I did watch a good film called Braking for Whales, well I enjoyed it, a comedy drama, a little different which I enjoy.
On a positive I sorted out my office filing drawers, I have 3 small units with about 8 drawers each, so much paperwork, most now in bin or burned - yeah I had a fire up the garden :) felt good getting a little more done and sorted but my arm / shoulder wasn't impressed by the end of it.
Foodwise, I skipped breakfast, just wasn't hungry, had early dinner which was a repeat of the day before, my sisters lush lasagne and then last night I had a sarnie with chips and veggie fingers on, they were really tasty, I'll be buying more veggie stuff, not only is it tasty, it reduces the meat in my diet which is good for the environment too. You get four fingers for 212 calories and I only had 2 on my sarnie, to be fair, it didn't need the chips. 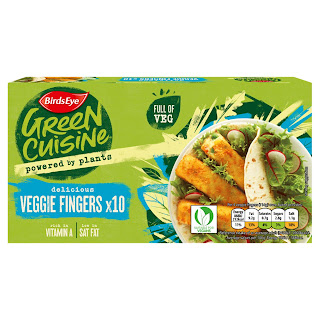 I'm going to make these noodles today, I'll use frozen spinach and half the recipe to serve just me, nice cheap tasty meal that'll be.
Hoisin noodles By Rachel Phipps Hoisin noodles recipe - BBC Food
Preparation time less than 30 mins Cooking time 10 to 30 mins Serves 2
Hoisin is the secret to creating an easy, no-cook Chinese sauce to serve with these cheap and cheerful noodles. Cooking the noodles and spinach in the same pan helps cut down on washing up, too.
Make this dish for less than £1 per portion.
Each serving provides 385 kcal, 18g protein, 56g carbohydrate (of which 8g sugars), 8.5g fat (of which 2g saturates), 5.5g fibre and 3.5g salt.
Ingredients
2 nests medium egg noodles
1 tbsp hoisin sauce
1½ tbsp soy sauce, plus extra for seasoning if needed
½ tsp toasted sesame oil
50g/1¾oz baby spinach
2 free-range eggs
2 large spring onions, thinly sliced
salt toasted sesame seeds (optional), to garnish
Method
1. Cook the egg noodles in a pan of boiling water with a pinch of salt, over a medium–high heat according to packet instructions, until tender.
2. Meanwhile, whisk together the hoisin, soy sauce and sesame oil to make the sauce. You might want to add an extra half tablespoon of soy sauce, depending on how much salt there is in the hoisin sauce.
3. Remove the noodles from the heat and add the spinach to the pan.
4. While the spinach is wilting, dry fry the eggs in a non-stick frying pan over a high heat, taking care to ensure the eggs do not burn.
5. Drain the noodles and spinach well before returning them to the pan. Stir in the sauce and the spring onions. The spinach should contain enough residual water to help the sauce cover the noodles, but you can always add more of the reserved cooking water for a looser sauce. However, be careful not to make it too watery.
6. Divide the noodles between two bowls and top each with a fried egg. Sprinkle over the sesame seeds before serving, if using.
I've just had a slice of toast because I wanted to take some painkillers for my arm, now to decide what to do today...
I could box some more stuff in the office, or try and get a bit more out of the shed ready for my brother tomorrow.  Yeah the shed I think, it'll save him some time and I'll know where stuffs going, I know have the shelving empty in the alley ready for stuff I need to keep.  I won't do loads though, I can't afford my arm getting worse, but at the same time, I can't NOT use it.
I wished it would bloomin warm up, I don't like having to put the heating on but there's only so many clothese you can wear indoors before getting uncomfortable lol.
I had great news yesterday my brother and his wife in Corfu have finally got an appointment for their Covid jab next month so when they can come over, they will have had at least one of the jabs which is brilliant.
Right I'm off,
Mwah, luv ya
Love me xx
Posted by Bev at 7:40 am