Here's to a good day with or without sunshine 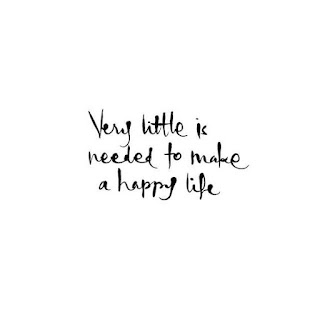 Yesterday was a good day, a very busy day but a very good day.  I’ve decided it’s worth rushing like a crazy thing Tuesday, Wednesday and Thursday to be able to relax on Sunday and do absolutely nothing if that’s what I decide to do.  Gutted that I didn’t get to sit in that glorious sunshine yesterday though, I do love a sunny day.

There was lots of weight loss at the scales yesterday, I managed a stayed the same which I’m chuffed with, as long as it’s not going up and up, it’s all good.  Yes I’d like to be a stone lighter, but obviously not enough right now or I’d do more about it, I’m content to do what I can, there’s too much going on in my world right now with mom for me to put any pressure on myself. 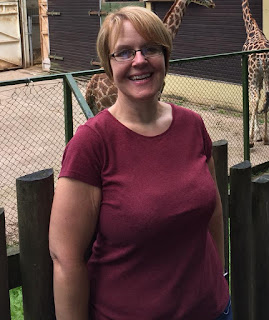 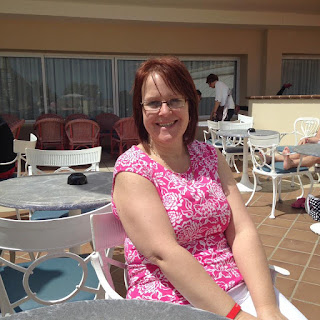 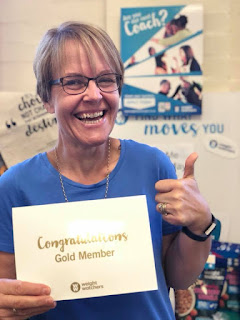 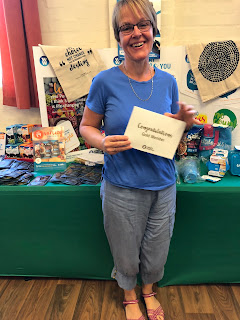 It’s always wonderful when someone gets to their goal weight and yesterday was no different, Debbie achieved her goal losing 36lb, she told us she’d lost weight with Weight Watchers years ago so knew it worked, however some of the original 7 stone loss had crept back on and although she tried to lose it by herself at home, she wasn’t sticking to it.  Her husband suggested she return and that’s exactly what she did and to say she was thrilled at the scales yesterday, well, that would be an understatement and everyone else in the room was equally pleased for her.  That’s why attending a meeting works, it’s that support and community that makes all the difference, knowing you’re not alone is so important. 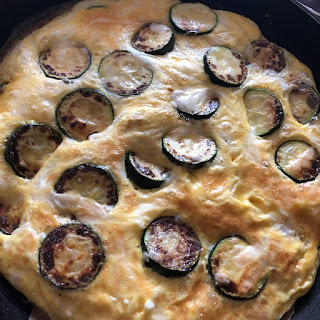 Well I had the start of a good day yesterday, I made a courgette omelette with a couple of courgettes that were about to shrivel up and die, that was delicious, my dinner was WW crustless quiche, then for tea I made tandoori chicken and saag potatoes which was delicious if not a bit pricey, I would pay full price, I’d bought it on an offer.  So almost made it through the day, unfortunately when I fetched moms papers, I spotted crackerbreads and remembered Lucy (yes I’m blaming you!) saying she had a couple at night with light cheesy spread on.  I did say at the time in the meeting, “I can’t trust myself with crackers, I just don’t stop” and yep I still have that affliction it appears because half the box has now gone as I ate myself into a crackerbread coma when mom had gone to bed, on a positive I got a little exercise every time I got up to go back into the kitchen to get another 2, that must have been a couple hundred steps by the time I did go to bed.  Another lesson learned, time doesn’t make a blind bit of difference to some things, I can’t have stuff like this in the house, I know I can’t have multipacks either, I just work my way methodically through them until they’ve gone.  The only safe multipack in my house is condoms – they’re never getting opened!

Right now for today, I have to do some housework, it looks like a hovel down there, they floor need hovering and mopping and the thing stopping me most is it hurts my back, but I’ll be brave and drug up, my knee is already in pain, I might as well get it a pal!  But first the bins, that’s a mission in itself ain’t it, we have 4 and I have so much rubbish this week it’s not going to fit, all the packaging off the garden furniture.  I shall go play bin ninja and see if I can sneak some in any of the neighbours bins that aren’t quite full!

What to eat today, I’ve got some corn on the cob I’ll have I think, there is some tandoori chicken breast kebabs too, not sure of the date on them, if it’s today we’ll have them if it isn’t I fancy something else.  Need to have a look in freezer, fancy a bit of fish maybe, salmon nom nom.

Eggs for breakfast again, that’ll be my veggie bit, I do want to get some tofu though and give that another go, we were talking about it in the meeting last night.  I’ve just added some to my shopping delivery, gone for a flavoured version, I’ll let you know!

Right I’m going to get on with my day, I have quite a bit of office work to get through once the bins have gone out and before I even contemplate the housework, one pays my wages the other doesn’t.

Here’s to being as healthy as I can today, pull back the crackerbread damage ;)

Have a good one BeYOUtiful. xx