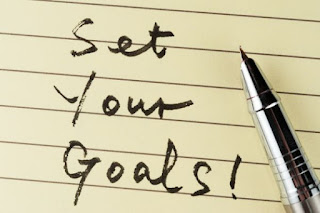 Oh ma'an when I write it like that, it becomes overwhelming, so I've realised I've got to break it down, set myself smaller goals along the way. So this past week, my goal has been to walk for 30 minutes a day, by achieving that it's made me want to eat healthy to get a result. I better get a result on Thursday! I Will get a result on Thursday, regardless of the numbers, I've felt better in myself, I've had more enthusiasm to do things like go for the walks, think about the next meal, do some gardening, not just sit around.

People often only think about that ultimate, long term goal, that can be a bit off putting because it's seems so far away to focus on.  12 weeks is after all 3 months, or 1/4 of the year! If you're end goal is likely to be even further away than that, focusing that far ahead can be completely overwhelming, so don't think too far forward, but remind yourself that this time is going to pass anyway so you may as well be focused on your health and happiness along the way.

I like to break it down, the more goals I set, the more I achieve and I feel amazing because I smash them!

Drinking a pint of water every morning started as a goal, it's now a habit.

Meditating every morning started as a goal, now it's a daily ritual and has been for over a year.

The 30 minute walking thing is my latest goal, this one's a toughie for me so I'll aim to do it for a week at first, if I succeed, I've achieved that goal and I might set another one to do it for another week.  I'm only setting goals I can achieve at the moment because I need to triumph to give me the enthusiasm to continue.

This is why I haven't really set a weight loss goal yet - fear being the reason I think!  I've heading towards the menopause, I don't know how this version of my body is going to react to my new approach to weight loss but if I'm honest, I'd love to lose a stone for Christmas.  If I'm realistic, I'd say 12lbs maximum, I think once I've been weighed on Thursday and seen what the scales say I've lost then I'll set myself a weight loss goal accordingly depending on that first week result. 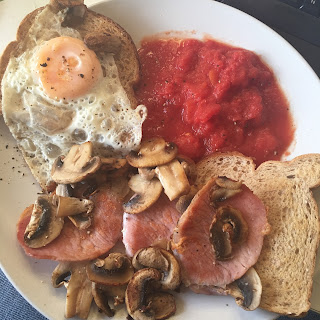 Day 5 - Meal 1
I had planned yesterday to play with my new Crockpot slow cooker, sadly it didn't arrive, apparently overnight means order Friday, arrive Tuesday - go figure!  Who knew, so my planned meals went out the window and we had pizza for lunch, they were delicious, bought the bases from Sainsbury's last week and they had to be used, 13sp each, I added passata, lots of veggies and 2sp of parmesan cheese, really enjoyed and very filling too. 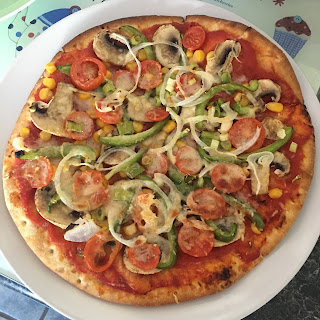 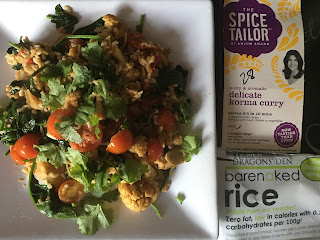 Our dinner not so good, I wanted to use a Spice Taylor korma sauce I'd bought a good while ago as its use by date was this month, so I made a cauliflower curry to try and keep the points down a bit as the sauce was a staggering 28sp, so not worth it!  I added cauli, pepper, tomatoes and then I had a packet of barenaked rice which has only 8 calories in the whole packet, truth is, I wouldn't eat or buy them were they not 0sp, and I probably won't buy them again even though they are zero smart points.

My dinner looked good but was quite tasteless, that left me unsatisfied and thinking about eating something else but I was all out of points, I had a couple of babybel lights - 1sp each to take the edge off so to speak and we had an early night which I honestly hadn't realised how much I needed because I slept like a baby.

Here's to another day, got a couple of meal ideas planned, will let you know tomorrow how they turned out, one is the Kofta Curry I blogged recipe to on 24th September 2016.

This time tomorrow, I'll be starting the last day of my first week, how fast has that gone, see the time will pass anyway BeYOUtiful, so get planning, because a goal without a plan is just a wish!
Posted by Bev at 6:49 am