I need to start paying attention!

Doh that moment when you wrap up something to return in a cardboard box you found because you couldn’t find the original packaging after looking for half hour, then you turn round and it’s waving at you!  I’ll rewrap it in a bit when I’ve done my blog.

Anyone who reads my blog knows I like a quote, do you have a favourite one?  If you do, will you comment it on my Facebook post or inbox me bev_ww@yahoo.co.uk , you can never have too many!

I can’t ignore the elephant in my blog room as much as I want to, my weight, mmm well what can I say, other than it’s gone up a pound again!  Now it’s not been a great week, moms not been well and neither have I and I won’t lie, I’ve got a little lazy in the kitchen, there’s been quite a bit of bread involved, it’s just easy to make toast or a sandwich when you feel a bit rough.  I’ve not been terrible and eaten loads of junk, I’ve just not really watched how much I’ve eaten, some meals have been great, or would have been if I’d Weight Watcher’d them!   For example egg and tomatoes on toast when I have my healthy and happy Weight Watcher head on would cost me 5pp, when I don’t like yesterday morning it cost me 12pp!  Not a bad different hey!  So I had a word with myself (AGAIN!) and we’re going to go buy a loaf of low calorie bread, stop using moms butter and go back to my low fat spread and get a grip, I will stop thinking ‘it’s okay, I can sort it out in January’ because it isn’t and I need to sort it a little now.  On a positive it looks like I’m going to end the year weighing the same as I started it, however I’d much rather be half stone lighter, to do that though I need to follow the plan.  There’s Weight Watchers Your Way and there’s Weight Watchers Not Doing It Any Way!  I’ve been the latter lately, I can give you a list of reasons and justifications or I can sort it out.  I’m going for the latter I think.

Got my brother and his wife coming to stay for a couple of days today, they’ll keep us entertained no doubt, I think I’ll go buy something healthy from the supermarket for us all to eat otherwise we’ll end up having takeaway and that’s not going to help my plans at all is it!

I really am ready for a week off, chance to recharge my brain and my body, 9 more days as I’m working Christmas Eve then I’m back to meetings on the 6th, I will do some work inbetween but it’ll be from home and probably in my PJ’s, of which I need a new pair for Christmas I think!

It’s so easy to go over at Christmas time because you want to enjoy yourself , I shared a link yesterday where the chap was telling how much exercise you’d have to do to burn off the calories (I won’t be inviting him to dinner!).  However we can choose a little better where possible, I noticed some mini mince pies in the Tesco garage at the weekend and thought I’ll take them to use as a visual, and they turned out to be 5pp for the two, not bad I guess if you really fancy having a bit of what you fancy, 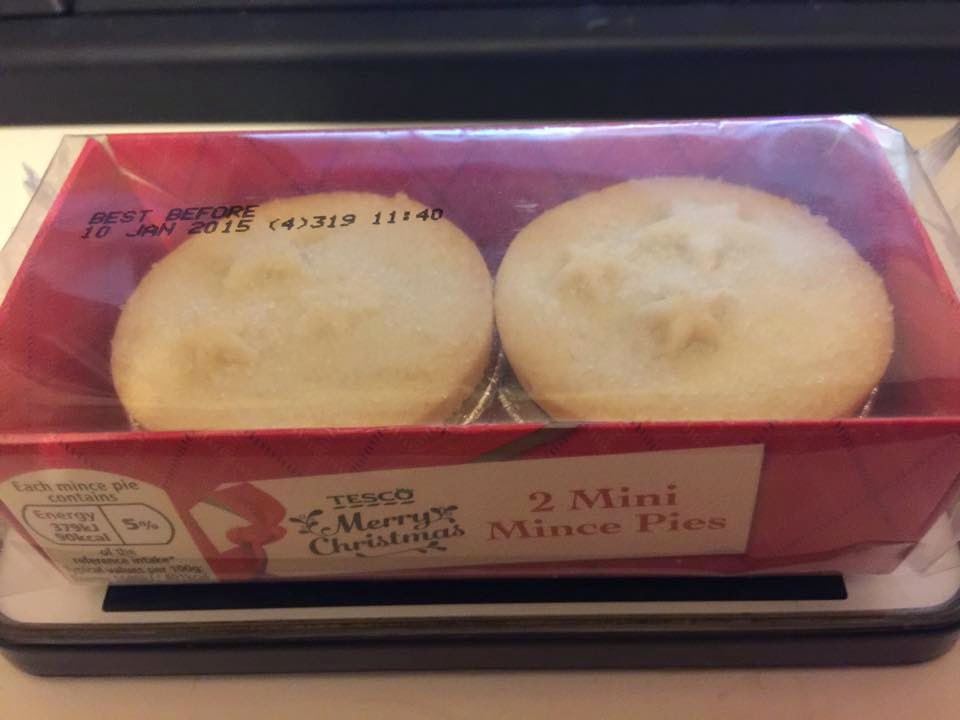 I’ve just looked on the Weight Watchers website and mince pies vary quite a lot from Asda, Morrisons and M&S’s mince pies are 6pp to Starbucks Luxury All Butter Mince Pie for 11pp and Caffe Nero’s are 12pp!  So maybe if you’re out having coffee leave having a mince pie until you get home and save those 5pp!   That’s a big difference really isn’t it?  How easy would it be stood in the queue in Starbucks for a coffee with your mate and just think “ooo mince pies, go on then!”  Too easy if you’ve turned off your weight loss aware radar!  It’s definitely worth checking on your app before you order!

That’s given me a bit of a reality check writing this today, can’t believe I spent 12pp on my breakfast yesterday!

I’ve just been downstairs to get the wrapper from a roast chicken dinner I bought yesterday in the Co-op because it was reduced to 89p from £3.49, you’ve got to look a bargain, plus they had two so that was our lunch sorted, and after wrapping almost 50 gifts I didn’t want to cook.  I was dreading working out the ProPoints but I’m happy to say it was only 10pp, I think ready meals are the future for me for the next month or so, just to regain some control over my portions and to fit in with my busy schedule.  It wasn’t the best chicken dinner I’ve ever eaten but it was food I could live with now and then. 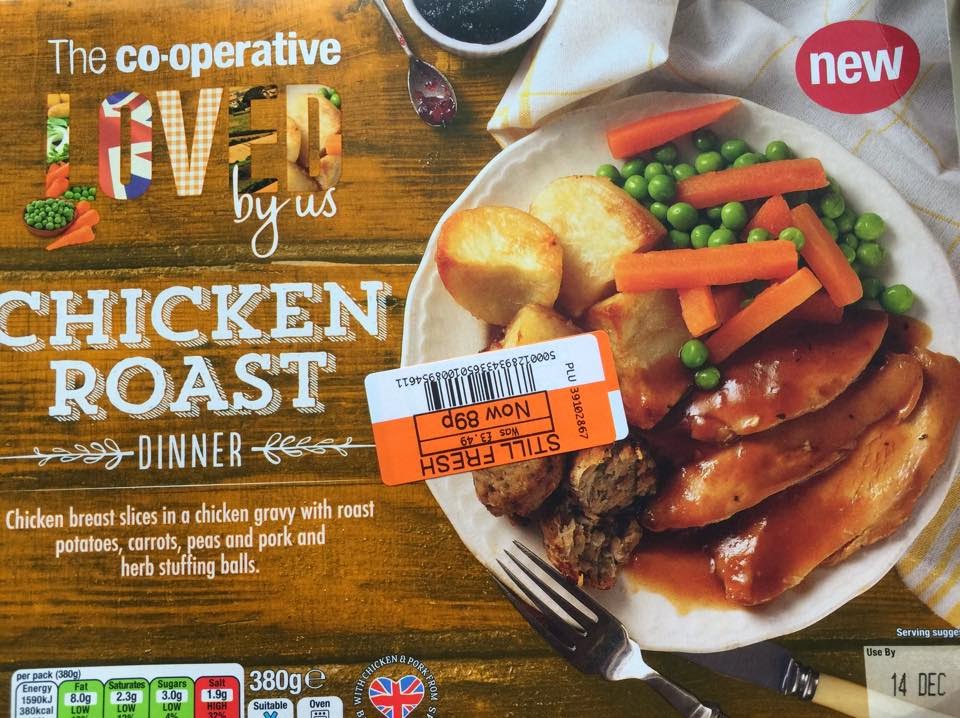 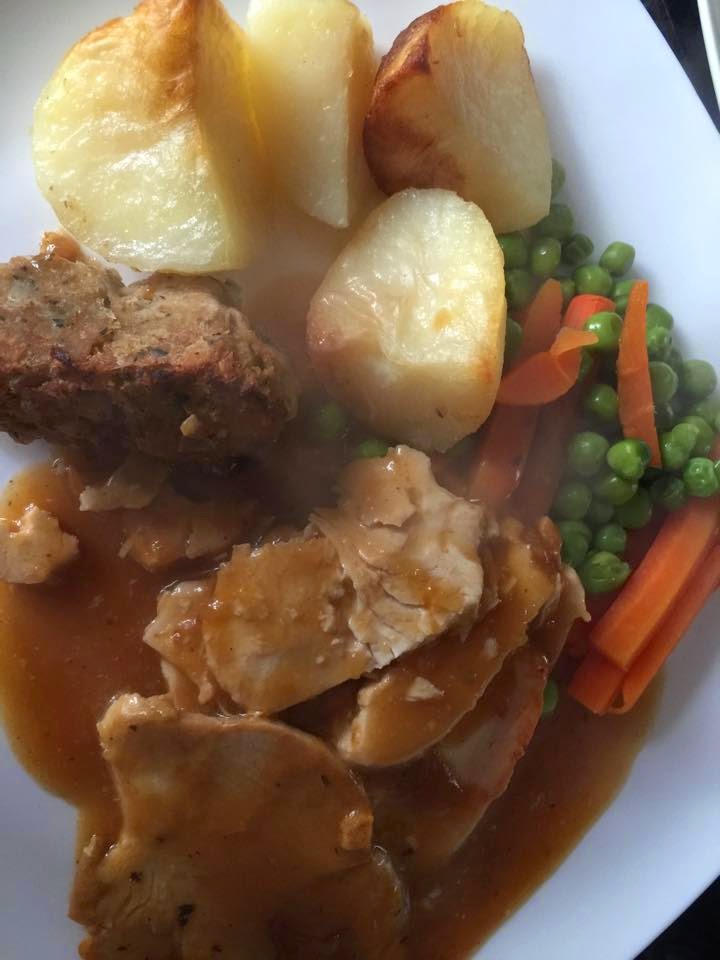 Right what’s on the To Do list today, wrapping is complete, need to get ready for my meetings this week, that’ll be my first job, then I’ve got a project to work on so I’ll say have a nice day and be on my way.

You know what, having just realised that ready meal should’ve been £3.49 I think I’ll be cooking from scratch more, that’s expensive, here’s to finding easy, quick, cheap meals to make or buy instead!

Here’s to a great week BeYOUtiful.