Together - we got this! 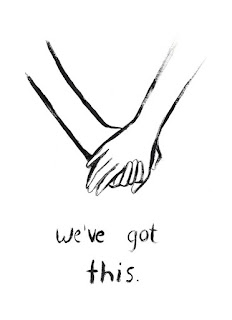 The one thing that’s come out of this week’s meetings is the need for support, everything is easier when we are supported whether that be our weight loss journey or any other part of our life.  We can’t live without help from others, just take a look around your house someone else made your furniture, the tv, the food in the cupboards was supplied by someone else, even if you paid for it all.  Yeah we are meant to work together to live easier.

I see it too, from the members that join together to the friendships that are formed in the meetings, not forgetting I’m there to support them too.  Although I can’t give them extra help if they don’t tell me they’re struggling and need it.  Sometimes it’s obvious that they do but not always, we have a great knack of hiding things and saying, ‘I’m okay’.

If you’re trying to support someone who’s struggling a great bit of advice is be a cheerleader, not a coach, they have me for that.  Don’t find faults with what they’re doing, instead encourage them and when they are doing right and cheer them on when they hit their smaller goals along the way.  Don’t dwell on the blips!   If they’ve had a bad day, listen, ask them about their progress but don’t judge, they already know they’ve slipped up.

Another great way to support someone else is not to tempt them with delicious goodies and don’t become the food police either – not easy to get it right is it, nope, it’s not easy to lose weight either.

If you’re the one after support, then remember not everyone in your house is trying to lose weight, does it feel like every time you turn round one of your kids is scoffing crisps, or your other half is demolishing a chocolate bar?  Are they conspiring against you, trying to sabotage your efforts?

They aren’t, you know that right?  It’s just they don’t realise, you may have asked them to support you on your weight loss journey, but have you actually told them how?  What does that look like!   Could you ask them to eat their treats away from you so you’re not tempted?  Maybe ask them if they’re happy to try a couple of your healthier meals each week to see what they think, otherwise you’re going to end up cooking yourself a different meal.  Talk about eating healthier rather than weight loss, everyone can benefit from getting healthier.

To support yourself, avoid temptation in the supermarket by putting only the healthy stuff on your shopping list, maybe order online.  If they want a treat let them go buy it themselves, I’ve been buying moms treats on a daily basis, you think it’s more expensive but to be honest she just eats more if I buy them all at the same time, so it works out the same.

Maybe ask the family to make a list of the treats they like then you can choose the ones you like least from that list to buy, then you’re less likely to be tempted.

And don’t be afraid to cheat, do your family say, I don’t want that skimmed milk, have you tried putting it into a whole milk container, see if they notice or mix it half and half, and gradually wean them off.  Cut the sugar and fat in recipes so they don’t notice you’re changing their favourite meals.

There’s strength in numbers - everything really is easier with support, so don’t be afraid to ask for it BeYOUtiful.