Starting day 6 of on it!

Wednesday 6th January 2021
Surround yourself with those on the same mission as you. 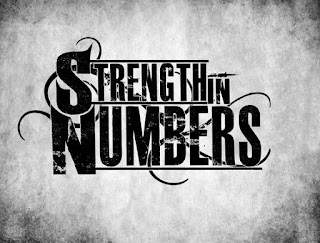 Sleep 8 hours YAY! awake once and restless a dozen times according to app, but come on 8 hours - that's brilliant.
Sleep makes all the difference, especially as we got mom to sleep too, she'd been okay most of the day, then around half four BANG, she started asking about her kids coming home from school, then from work, I messaged my sister who said and rightly so, 'how the fk is a person supposed to cope with questions like that', then pointed out whatever you say to her, she just rolls her eyes at you! We've tried all the suggestions, the going along with it, but that makes her worse and it's not like it lasts half hour, it goes on for a few hours.  Thankfully Anne came round and it took us a good hour but finally we distracted her, Anne doing the funniest impressions of people she meets when walking her dog in the morning, or when she's in the local shops, just hilarious. It worked, when she left at half seven, mom was good and I got her in bed by half eight, and did I mention we've had 8 hours!  I heard her get up at three, but she went to bathroom and went back to bed, I wanted the loo but knew if I got up I'd not go back to sleep, so I risked staying where I was, I say risked because even though I'm 50 and I haven't do it for 40+ years, I used to wet the bed as a kid, I'd dream I was on the toilet and follow through lol, I still go to the toilet too many times before bed just to be on the safe side lol.  Well that was oversharing maybe or just being comfortable with who I am these days and knowing something I did as a child is no longer embarrasing to me, I'd be mortified as a teenager if it got mentioned!
Well before mom started last night, we'd had a good day, I'd done my walk both with the dog (not very far) and the Youtube one, I had leftover crustless quiche for breakfast and got mom to have some too, so that's a meal to cook again, as she can eat it because it's soft. 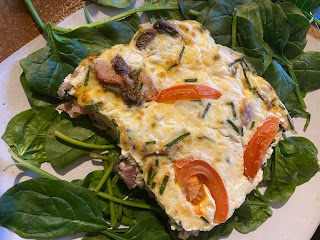 I enjoyed cod in butter sauce with roasted cauliflower rice and peas, this was cooked when mom was having her wobbly hence the slightly crispy cauli, but it was tasty none the less, that fish is getting smaller though, half the size of my mobile phone and not even a cm thick.  I just love the sauce on it though, I might just add extra fish to it next time (I've said that before). 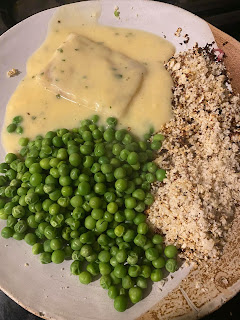 I also made soup, courgette and potato and it was amazing, made about 2 litres and I've easily eaten a third of it already.   Great way to fill myself up and use the veggies in the fridge. 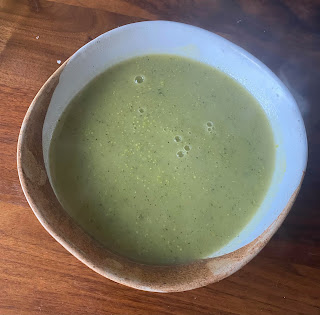 I've got lots of curries to look forward to in my freezer, I even prepared the cauliflower rice in the fridge ready to roast, although I might make some cauli cheese bites with that yet.  I've got crusty cobs coming today, want a cheese and onion cob in my life, also a fish finger cob nom nom, other meals on my list are salmon, lasagne, smoked haddock risotto, gammon and mash, chicken tikka masala and rice.  I've treated myself to some charlie brigham ready meals for one because they were on offer but also it'll save me cooking a recipe for 4 and having to eat the other 3, still working at reducing the contents of my freezer (it's a bit like the wardrobe that leads to Narnia, goes on forever, or the tardis).

I've got some actimel drinks coming too, they're on offer and I abused my belly over Christmas so I'm gonna show it a little love again.

Oh I haven't told you the best thing that happened to me yesterday, my mate Sarah asked me if I wanted some clothes, so I'm not gonna have to buy anything to wear other than joggers this year now, and to be honest as no one can see the bottom half of me on zoom, I don't really have to rush to buy them.  As soon as I lose a stone, I'll be able to comfortably get back into the trousers I already have.

I was talking to Vicky about bubbles and it's great that people can still have them because they shouldn't be alone, but I think single carers living with someone with Alzheimers should be on that list!  Thankfully my sister is officially my moms carer so she's allowed to come round, but if she wasn't, I'd too be in isolation with someone I can't converse with, it's no different to being a single parent with a small child really.  There must be others out there in similar situations ;(

I'm hopefully going for a walk this morning with a mate, that'll give me some fresh air and chance to see someone I haven't seen in months - ma'an I miss people!  Right lets have a great day again, I need to think about distraction techniques for teatime when she starts to drift, it's not easy because tele is rubbish, she doesn't 'want' to do anything I suggest, but I'll keep trying lol.