30th October 2017
Maybe the journey isn’t so much about becoming anything, maybe it’s about unbecoming everything that isn’t really you, so you can be who you were meant to be in the first place. 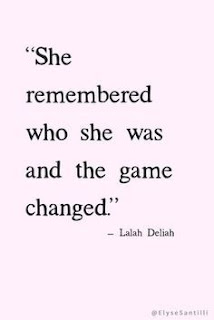 Who’d have thought it would only take 4 hours out the house having giggles with my bestie to remind me of who I am, welcome back I say!  I’d almost forgot how to be happy there for a moment, yet it’s so easy – you wake up and decide each and every morning that you are going to be in a good mood.

STOP TAKING EVERYTHING SO SERIOUSLY!

Yes I was shouting at myself there, you too if you need it – it’s time to get back to me.

We didn’t go to the cinema, you can’t chat there so instead we went for food so we could chat – damn I’ve missed that.  We went to the Crown on the Wergs Road which is usually brilliant, I was disappointed, our starter was fab, but there was something wrong with my main, it had an antiseptic taste to it, I would’ve told the waitress if she’d ever come back, 2 hours we were there and no one came over to take our main plates, they served and took away the desserts from the large table next to us whilst we were sitting there with finished plates and empty glasses.  In the end I went up to the bar and paid, he wasn’t interested in the fact my food tasted of Dettol and I’d had to nice an afternoon to pursue it, plus we saved ourselves from more drinks and dessert so there’s the positive in that situation.  We also saved the cost of the cinema which after popcorn and pop would’ve probably been the same as a meal for two.

So other than happy what do you want?   I’d quite like to be healthy too, so there’s my reason back to get back on track, I’ve been eating like a wild boar (I’m assuming they eat a lot, I don’t really know, I’ve never had dinner with one – I’ve dated something resembling one, but never met the real deal).  From today, it’s time to stop messing about, I keep using the, “I’ve got ‘such & such’ to eat first before I can start, it’s too many points and it’s not No Count, so I’ll get that out the way and start” excuse to postpone my tracking, well that stops now, the chicken sausages are defrosted and I can point and track them!

There’s a glorious sunrise outside this morning, the start of a bright new day and it’s up to us what kind of day we’re going to have, yes things will happen, we can’t direct the wind but we can adjust the sails on our boat, what direction are you going to take, the one that takes you to a dark place with no light switch, or towards the sunshine, even if you have to make it yourself because it’s raining?  I’m for the sunshine, the happy, seeing a grey day as silver.

To help me with that, I’m going to start making sure I schedule time in with friends, time for me and things I enjoy doing, life shouldn’t be all work and no play.  I needed yesterday to remind me and it proved it only has to be a few hours at a time too.

Yep, woke up after a good night’s sleep in clean sheets feeling ready for the day ahead, it’s going to be a long one but I’m ready for it and positive – that’s always a good thing.

You with me BeYOUtiful, but your smile on!
Posted by Bev at 7:31 am