Nice not to want more!

26th June 2012
Remembering that you are going to die is the best way I know to avoid the trap of thinking you have something to lose. You are already naked. There is no reason not to follow your heart. Steve Jobs

Really pleased at the scales yesterday morning, I lost 1 1/2lb was hoping for 2 but that was wishful thinking because I did go over my weeklies and use my activities plus a few, but I think adding in the filling and healthy foods really helped me over the weekend.

Running 5k after my meeting was so easy though, after standing in a field all day Saturday, sitting in a car for so long followed by sleeping in a bad travelodge bed I was achy and stiff before I left the house, add to that lack of sleep and running was really hard work, it did get a little easier half way through though.  What kept me going was my desire to get back to goal.

I’d already decided I want to do that by the August bank holiday but after reading the BBC article about our waist sizes http://www.bbc.co.uk/news/health-18570445 I want it even more.  The researchers found the average waist measurement for women is 84.9cm (33.43in), compared with the healthy size of 80cm (31.49in).  I measured myself and it said 32.5in I was gutted because even though I’m overweight according to the charts I thought I was healthy, I’ve just gone to re-measure to check and realised the tape measures broken and starts at 1in not zero, so I’m actually a 31.5in waist, feel better now, but want to be nearer 30 inches to be honest, I don’t mind storing my excess by having a big bum and chunky thighs but I want a healthy waistband.

I had a really enjoyable day on Filling and Healthy yesterday, it looked like this 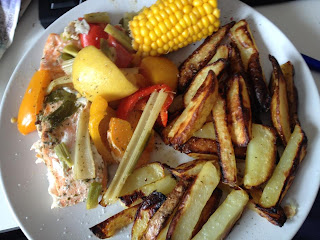 Salmon fillet, peppers, celery, spring onions & ½ lemon  cooked in a Weight Watcher garlic & herb bag served with the most delicious home made chips! (on ProPointing day the salmon would have been approx 6pp & the chips 2pp per 100g (guessing 500g max), I didn't weigh them, plus 1pp for the WW oil spray.  I steamed the chips for 10 minutes first them coated in 1pp of oil and cooked in oven on gas mark 4/5 for about 50 minute on a mesh tray too, helps the heat get everywhere) 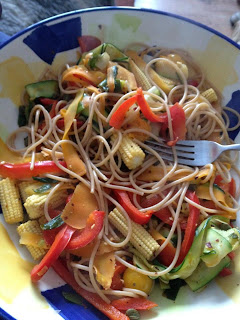 Wholewheat spaghetti. With stir fried veggies. I added a few chili flakes. It was very tasty to say I didn’t add any sauce and really hit the mark.  I didn’t weigh the spaghetti just took out a handful then out of curiousity when it was cooking I weighed the spaghetti that was left in the packet because it had been a full one, and I’d taken exactly 60g, so my portion guess was pretty good, it was plenty and would have been 7pp total including spray oil on a ProPointing day.

I also had a few slices of cooked meat when I opened the fridge throughout the day as my snack but overall I wasn’t hungry at all, didn’t bother with my glass of wine last night, had diet coke instead.  So finished the day with 6pp earned from running, another 5pp on my pedometer (I remove it when I run) and my 49 weeklies still intact because the oil I used in cooking was covered by the amount allowed on F&H, and I could have as many cups of tea as I wanted.  Mmm I’m liking this a lot this week.

Today I’ve got mango and 0% Greek yogurt for breakfast and for my main meal I’m going to have gammon, potatoes and vegetables.  Still thinking about tea time, need to see what I’ve got in the fridge and cupboards.

The fact we actually have sunshine outside is helping too!  Have a great day xx