This weeks been a blur

Thursday 18th February 2021
Being strong means knowing when to be soft. 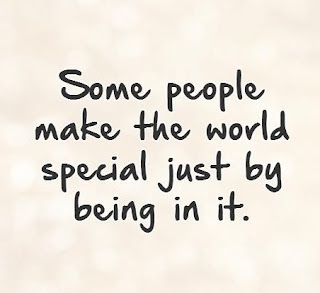 I spent yesterday waiting for a call to take mom home, I'd spoken to someone on the morning that said she was just waiting for her medication and they'd call me to collect her.  Then about half three I got a call to tell me she couldn't come home, she'd been a little sick a lcouple of times and they wanted her to stay to make sure she was okay.  I asked what she'd eaten and she checked her chart and said a pasty and some pudding and I confirmed 'yep, that'd make her sick'.  I know mom  eats crap but it's small and often, the pastry in that pasty would've made her sick, it's her hiatus hernia she has, since she had the twisted stomach about seven years ago and was in hospital with it, she hasn't eaten food like that since really, she can manage a piece of toast, or a few chips on one slice of bread but that would've filled her up and made her sick.  Hopefully that's the reason and she'll be home today.  I'm not gonna lie, I shed some tears after putting the phone down, as much of a bloody nightmare as she can be, I'd rather have her here being a nightmare for me.
She was really unhappy when I talked to her on the phone she thinks she's being sectioned and kept against her will.  She thinks I won't go and fetch her, that I don't want too.  of course none of which is true.  I know she has dementia but she also has lucid moments and memories, cruely the memories that she does have are usually the worst ones!  When mom was a teenager, she was really shy and being from Yorkshire the kids at school were cruel as kids are and teased her about her accent.  One day she took an overdose and in those days, you weren't given a cuddle and told, 'there, there never mind, we'll help you', nope she was sectioned and locked up!  Mom was a very, clever kid though and she worked out to get out, she had to 'play the game', she told them what they wanted to hear in order to get out of there.  It was a horrible time for her and the reason she absolutely hates hospitals!  It's how I know if she's truly ill or just being a bugga, I always ask do you want me to call a doctor because you'll probably end up in hospital - if she says yes, I know she's really poorly.
That's the reason, I want her home as soon as possible because I know in her lucid moments, she'll be having a really tough time.  When I spoke to her last night, she said 'I'm being kept in this loony bin and I've lost Alfie', amongst other things.
On a positive, thanks to the lovely Gail, I've got Alfie's skin calmer.  Honestly it was red raw yesterday morning and he was so uncomfortable and distressed.  He's always suffered with a skin condition but this was worse, I put it down to a combination of stress over missing mom as well as his usual stuff.  We did work out I had washed his bedding too, so that maybe didn't help, I've given it another rinse without the non bio powder I used initially.  Top tips from Gail to piss your dog off and calm down his itchy skin ;) Camomile teabags - yes you read that right and no don't make him a cuppa, the lady in the Tesco garage said, 'ooo posh, check you out', to which I replied they're for my dog lol.  Then I explained that I was putting half a dozen in a bath of warm water for him and I have to say as much as he wasn't impressed with having a bath, the skin calmed down almost instantly.  It didn't cure it but it made a huge difference!  Sudocrem on his hot spots and between his toes, although Gail said when I sent her a photo of the footprints on my floor, 'I said between his toes, not all over his bloody feet!'  She's never seen me do skincare on myself, she should've had a chat to V first. 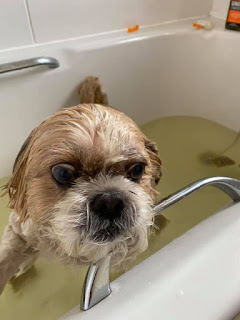 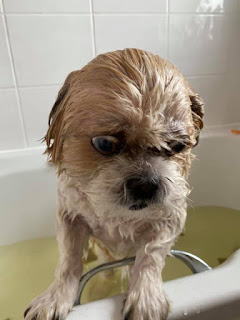 As you can see, he wasn't impressed at all, but thankfully we've both had a decent sleep because of it.  He was unsettled at first but we've had 8 hours of much needed sleep for both of us, not gonna lie there was piriton involved for him too.  He needed to calm and settle down and they helped.
My diet is none existence on the planning front, on a positive I've not been drinking really, had a glass before bed last night.  I have eaten watermelon to!
As disappointed as I was to not get mom back yesterday, I'll still beyond grateful to every person that's been involved in my moms care since Sunday, they are incredible people, doing an amazing job and deserving a higher rate of pay!  Special thanks to Donna for keeping me in touch with mom when she can, after all she's busy doing her job so nips to see mom when she has a minute spare.
I'm gonna go make me another cuppa, go enjoy a hot bath and then have breakfast whilst I wait for a call about mom, here's hoping she's had a good night.
Mwah, luv ya
Love me x
Posted by Bev at 8:22 am