Friday 19th February 2021
Kind words can be short but their echo can be endless. 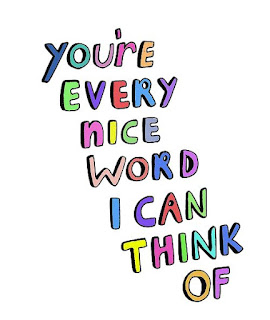 Well yesterday was another day of frustration and waiting about, after not being able to collect mom the day before because she had been a little sick, I'd put it down to her eating the wrong food.  When I eventually got through to ask about her, I was told she wasn't coming home, when I questioned it, they got someone to talk to me who informed me that she had to wait to see a gastro doctor!  To say I was upset by this news was an understatement!  When the doctor eventually called me, he told me that they wanted to do the camera down her throat this morning because of the sickness. After initial doubts because mom already has a huge hiatus hernia so I didn't see the point of putting her through all this when there's nothing that can be done anyway, I called them back to discuss this.  The phone rings constantly engaged which is frustrating but I eventually got through and after speaking to the doctor again (he was still on the ward thankfully) he explained that she has fluid in her esophagus and they want to find the cause as she could get an infection in her lungs again.  I asked if they'd be able to treat the cause anyway and was it worth putting her through such stress, apparently some causes could be fixed and some not, so with that in mind, I agreed to let her stay.  He told me that when asked mom had told him she had lost weight lately, my response to that was, why are you asking someone with dementia rational questions about her health, she hasn't lost weight lately, just as she hasn't been walking the streets with nothing on her feet looking for her dog!
I just want her home, don't get me wrong, I've made peace with the fact my mom is going to die, that might be in the next few days or years, I don't know, but I want her home to take care of her until that happens, no matter how bloody difficult it is.  I've only spoken to her once for a couple of minutes since Tuesday, I'm just praying she doesn't remember that she hasn't spoken to me.
The rest of my day was a blur because I was just waiting around for the hospital to call.  I did finish an audio book and then start crocheting a scarf to keep me occupied.  The downstairs of my house has never been so tidy, I even hoovered the stairs and landing.  I'm going to have a go at the office today, it's a mess and I'm not going to hear anything before lunchtime I don't think for a minute, so it'll keep me busy.
Everyone has been so lovely messaging me and asking after mom but I was too upset to keep going over and over it.  I posted a short update on Facebook and asked people not to comment, mainly because I know everyone means well but some of the comments wind me up and I know they shouldn't because they come from a good place and I'm being dramatic, but sometimes I need to be a drama queen and throw my toys out of the pram without someone trying to do the 'there, there, nevermind, it''s all for the best' type of response.
I've been awake since three this morning, so much for catching up on my sleep lol, can't blame mom or the dog because she's not here and he's spark out thanks to Gails free advice to help his rash.
Now I'm going to ask for your help, I want to make this week have some kind of positive and I thought having something named after mom would be lovely, so when Gail told me about her fundraising appear to help her charity, I was all for that, having a plaque on one of the kennels would be a wonderful way to put a positive on a pants time!
Gail is part of a charity 'Animal Friends in Turkey' their work in rescuing abandoned animals from the streets of Turkey and rehoming them in new loving homes in the UK only survives thanks to generous donations and fundraising, they are totally reliant on this.  I Know we're all struggling at the moment in one way or another and finances for most are tough, but if you could afford to make a donation you can do so via this paypal link or by bank transfer 30-90-89 37878068 (more info from the facebook post below)
Right time for another mug of tea, maybe some toast, wonder if I could fall back to sleep if I lay down? Worth a try maybe, we'll see. Here's hoping they let mom home later and that when they do, she settles and isn't too confused.
Mwah, luv ya
Love me xx 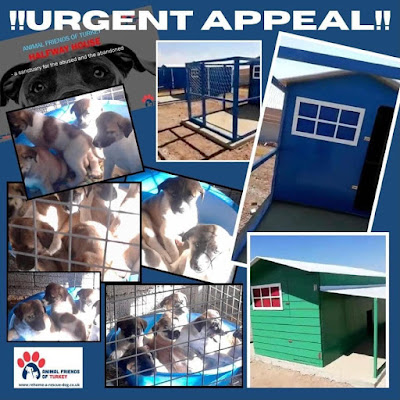 THE AFOT HALF WAY HOUSE SanctuaryAppeal and updateWe would like to bring you all up to date with where we are with getting the sanctuary open. It has taken us longer than we would have liked due to the on-going Covid and transport situation which have both meant our fundraising and normal donations have seen a dip, but thanks to the previous support received we are happy to say that all the initial works we set out to do will shortly be completed and for the sake of the animals waiting who are desperate for our help we need to get this ball rolling.For this we need YOUR helpWe now have the opportunity to purchase some fantastic cabins which means the sanctuary could open, we already have these 7 pups waiting….. We are looking for help with 4 Blue kennels at a cost of £350 each, these will be used for puppies or animals recovering from illness.If you would like to donate for one of these wonderful cabins, then a plaque with a name of your choosing will be mounted on it, maybe in memory of a loved one or pet, whatever you choose. Alternatively maybe a few of you would like to share in donating for one and agree on your special name for it, whatever any of our supporters can do to help will enable us to get the sanctuary OPEN to get help to many of the dogs that are desperate.We also require 3 of the larger green cabins at a cost of £600 each and we are excited and very happy to say that a fabulous supporter who wishes to remain anonymous has come forward and donated for these plus the extra costs to get all the cabins delivered to Fethiye.If you are able to help please get in touch with me direct via pm or e-mail animalfriendsofturkey@aol.com.If you would like to make a donation you can do so via this paypal link or by bank transfer 30-90-89 37878068
Posted by Bev at 6:27 am