Anyone else awake at Stupid O'Clock! 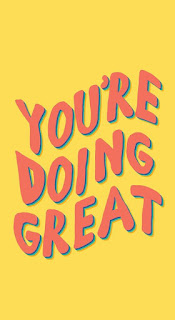 Another day working at being healthy, it was a strange day and I won't lie I was glad when it was over, I've got a lot on my mind at the moment and I've been awake since 3.30 partly because of that and partly because mom woke me up.
These were my meals, I even indulged in 12g of real butter on my breakfast muffin - because I can!  It's not the individual food that's the problem, it's the quantity we consume that causes the problems.  There is so much information out there about diet and what and when we should eat, how's the best way to lose weight, blah blah blah, in the end we start to become confused about what to eat!  We have to be the only species on the planet who gets confused over what to eat - you don't see a cow standing in a field questioned what to eat!  Can you imagine that!  Picture a Giant Panda looking at a pile of Bamboo and thinking, oh I don't know, is this what I should be eating today, I ate this yesterday?  All this information we're being giving, all these options, it's truly confusing us to the point where because we don't know who to believe, 'high carb, low carb, high protein, low fat, non dairy', we end up not doing anything.  We're on what you could call a High FaCt Diet, see what I did there!  We need to go back to basics, I talked about portions and how diets work on my video the other day https://youtu.be/RmHB88NQtkI but let's be honest we all know that if we're not losing weight, we're eating too many calories, so we need to cut down and that's what I'm working on, eating to my appetite. 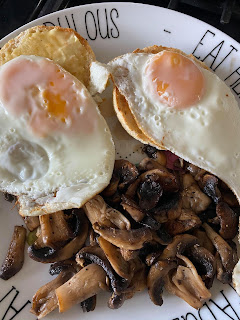 Now these were both well thought out meals with portions that were appropriate and suited my appetite and the time I ate them. 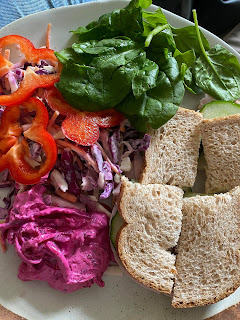 This meal was not thought out and in control (and that's okay sometimes), I'd had an extremely difficult day, very stressful and when I got home after work I didn't fancy cooking and spending loads of time in the kitchen, so I checked the date on stuff in the fridge, the beef mince was 3/9 which is why I took that out, I had planned a recipe but not a chance was I doing that, so I threw the last of the chestnut mushrooms in a pan with the mince and a couple oxo cubes and it turned out delicious.  Stuffed it into 3 taco's and bunged on a pile of Spinach. 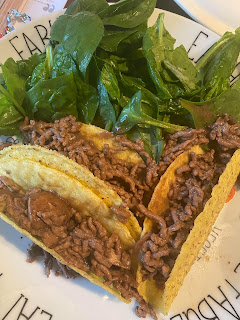 Truly I only needed two of those tacos, but I ate with such ferocity that it was gone before I blinked, the truffle pig in me came out for sure, I even had a slice of bread and spread to wipe the pan out when I went back, I put what was left in the pan in a container, but kept pinching a bit more because it was so good.  It didn't sit well in my stomach later though, that's another thing I'm doing, paying attention to the effect the food has on my body, I haven't had heartburn or indigestion for a few weeks now since I started paying more attention to my food and the portion sizes.
I made it through the day on track and that's all that matters, today's my long day, I'm at Bloxwich this morning and tonight, it's raining outside at the moment, let's hope that knocks off sooner rather than later.
Yoga was a bit of a wash out this morning, I managed 10 minutes but my knee gave out, hopefully that'll be okay tomorrow, or I'll just find a routine that doesn't involve being on my knees.  20 weeks Saturday since I started doing yoga and I haven't missed a day on the mat yet, I'm quite proud of that.
Right my lovely, let's have a mindful day, enjoy every bite of whatever you choose to eat.
Mwah, luv ya
Love me x
Posted by Bev at 6:35 am