Looking forward to being weighed by my boss (for a change!) 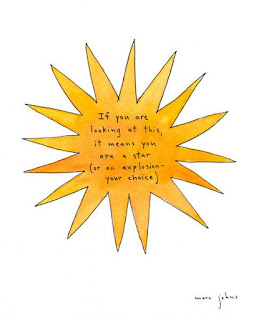 Another No Count day in the bag, I get weighed by my boss today at our area meeting! Eek ;) Actually not eek, I feel really in control of my food and my eating this week, having my 3 meals and not really thinking about food outside that.

Breakfast yesterday was a huge hit; 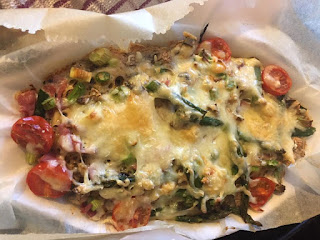 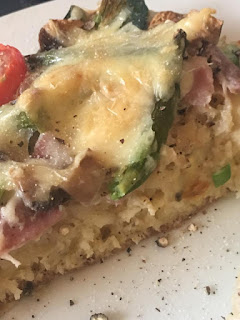 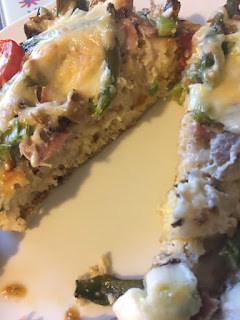 I found me a dish that would fit crumpets, I wanted to do 1 in each dish but nothing was the right size so I found a gratin dish that held 2 crumpets. I put the 2 crumpets in the bottom, then in a jug I chopped up mushrooms, tomatoes, spring onions, bacon medallions and some leftover asparagus from last night's dinner (basically anything you have to hand that's No Count. I mixed it all up with 2 eggs and poured the mixture over the crumpets. Topped with 2sp of Weight Watchers grated cheese (weekly allowance) and popped in the oven for about half hour on gas mark 5 whilst I got on with doing something else.  The result was really tasty. 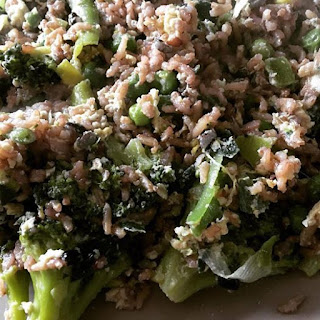 Lunch was a much easier affair, I wanted some veggies and some brown rice, I was thinking about my digestive system!  No drinking alcohol has had an affect on that and not in a great way.  I did me a plate of veggie egg fried rice, it was delicious, I even used some of my weeklies and added 4sp of butter to give it a bit of umph.  It really tasted much better than it looked and without being too informative, it worked on my system too :) 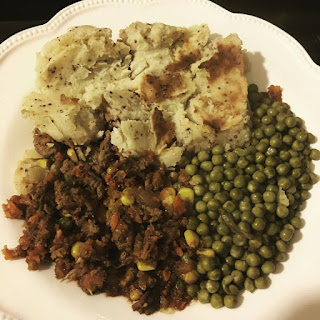 Dinner last night was quick and easy, I used that cupboard concoction mince thing I made the other day and had a cottage(ish) pie with peas, no cooking needed just warming up in the microwave which is what you need at the end of a busy day.

Now and again I like to do an internet search for something and this morning it was the benefits of not drinking alcohol because as yet I'm not feeling them!  I did however find this line in one of the articles and I love it;

How very, very true, not the effortless blond curls bit, the "Oh, well.  Being a grown-up is hard".  Yep it is and if it was something we all accepted a little bit more, life would be easy to survive and cope with I think.

Now I was thinking about a McDonalds dinner after my area meeting last - we've been talking eating out all week and it's made me want it all, maccy's, Chinese, Indian - all of it.  However I've just realised and accepted if I want some more weight loss this month, I'd rather give them a miss.  Don't get me wrong I know I can eat out and lose weight, I did it last week Pizza Hut and a 3 course meal at the crown, but not this week, this week I'm doing No Count, I have a fridge full of food and I really don't need to be eating out for no real reason.

Instead I'm going to be having myself fakeaways, I'll make myself a burger later, ooo I need a jar of gherkins and a lettuce to do it properly, I can stop on the way home.  Then I think tomorrow I'm going to make me a curry or some tandoori chicken - or both.  See, that's being a grown up, a little harder than thinking "sod it, I'll have a takeaway" but so much more rewarding when I see those numbers go down on the scales when I get officially weighed at my weekly weigh in on Monday.

Are you up for being a grown up this weekend BeYOUtiful?  I am because I want to see results on the scales for the rest of this month - staying Focused in February!