Are you causing yourself pain?


8th September 2016
Self -love requires you to be honest about your current choices and thought patterns and undertake new practices that reflect self-worth. 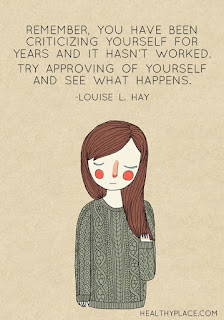 What a muggy night, I love the heat but yesterday it wasn't a nice heat at all, it was like someone had thrown a winter duvet over the sky and that continued throughout the night, I've been awake often!

No and again something is said in my meeting that really strikes me and it happened last night, one of my lovely ladies who's been put on a gluten free diet for her health told us that she's been eating bread even though she knows she shouldn't and it's painful to do so and I responded, "so you're knowingly causing yourself pain", to which her bestie said, "aren't we all" and how right was she!  We might not be doing it in such an obvious way but we all know we are damaging ourselves by overeating, whether it's medical, physical or psychological.  That really hit home for me, even though I say similar often, in that moment when I'd found it quite comical that even though she knew it was going to cause her pain she still ate it, I realised I do that every time I eat something that causes me a bit of heartburn!  We all know by overeating regularly, we're going to gain weight, by gaining weight we're more likely to get so many different illnesses, I'm not even going to go into that.  Also though it's the psychological effect it has on so many people, what it's doing to how you feel emotionally.  That's really worth trying to consider these things the next time we're throwing stuff in our shopping trolley!

I had a donor kebab last week or the week before, I can't quite remember and it was tasty, it also gave me heartburn and wouldn't have helped my weight loss efforts at all! Yesterday for my dinner I made my own version, I toasted a pitta bread (5sp), my breads always wholemeal but the pitta had to be white, I then sliced some salad including white cabbage and stirred through some mint sauce, that's the bit I like most about a kebab I've come to realise.  When I did my "I'm hungry and not pointing" supermarket shop on Sunday I bought a piece of lamb seasoned with Harissa, lemon and coriander and it was only 6sp for 1/2 the pack so I sliced some of that and added it to the pitta, it was really good, so good, I had the same for my tea. 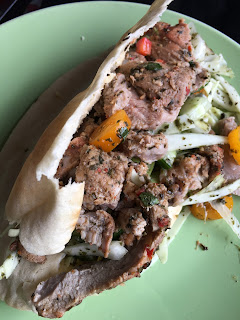 The only thing that ended up in my trolley that is quite high is a pack of stuffed meatballs, they're 18sp for 1/2 the pack, but I'm think if I have salad for my other meal or soup, it'll all balance out.  Then I'll do a much more thought out shop next time, use my calculator as I go round and take a marker pen with me to mark up the foods.

I'm still not finding any of it easy, I'm not going to lie, but I'll never give up trying, I'm sure it's because I'm all good, my life is just how I want it, I have a fab job, good friends, being a bit overweight just doesn't seem that big a deal.  As long as my weight isn't going up, I'll chip away at it and hopefully it'll go down a bit at a time.

If being slightly overweight is the biggest problem I have in the world, life's pretty damn good ain't it!  Having said that, meal planner for the coming week I think, I'll eat those meatballs today then that'll leave everything else in my kitchen healthy, except moms treats which I seem to be resisting again, so that's progress.

One step at a time!  Oh and for those of you who now fancy a donor kebab, here's the recipe for a lower pointed, equally tasty one;

Donor Kebab
serves 4, No Count or 4sp's per serving

1 teaspoon dried oregano
1/2 teaspoon dried Italian herbs
1/2 teaspoon garlic powder
1/2 teaspoon onion powder
1/4 teaspoon cayenne pepper
1 teaspoon salt
1/2 teaspoon black pepper
500g extra lean mince beef
Preheat oven to gas mark 4/180C.  In a large bowl, combine the dried oregano, dried Italian herbs, garlic powder, onion powder, cayenne pepper, salt and black pepper. Add the beef mince and mix thoroughly for 2-3 minutes. Take out all of your beef mince and mix thoroughly for 2-3 minutes. Take out all of your aggression on the kebab mixture, punching and kneading until no air pockets remain and the kebab meat is extremely smooth.  Shape the seasoned mince into a loaf and place on a baking tray. Bake in the middle shelf of the oven for 1 hour 20 minutes, turning the loaf half way through the cooking time to ensure even browning.  Once cooked, remove from the oven and cover with foil. Allow to rest for 10 minutes. Slice the donor kebab as thinly as possible and serve with pitta and salad.  NOTE: On No Count you can have WW pitta bread, if doing ProPoints you will need to add extra pp's for the pitta bread.
A good tip if this is something you think you'll eat regularly is to make up a batch the spice mix in a jar so it's ready to go when you fancy it and you can just pour it into the mince.  I might do that myself so I can make some and freeze it once cooked, then I could just take a few slices out as and when I get the kebab urge, with a box of microwave chips (7sp), mmm instant tea.

That's me for today, I've got to get ready for work, we're having a cracking week, it was great to see Keith get his 3 stone award having joined earlier in the year, he's loving it and has still enjoyed plenty of holidays this year. 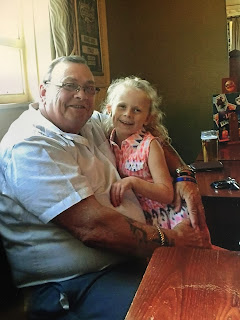 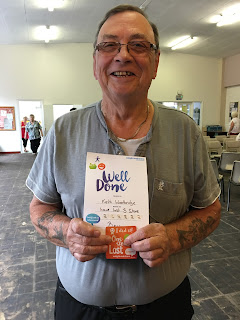 Right I'm really off now, here's to having the best day you can have, no pressure, just a whole heap of support coming from me and try and be nice to yourself too, give yourself a break if you're struggling - it's not easy, don't let anyone tell you any different BeYOUtiful. xx
Posted by Bev at 6:44 am