And breathe, it's Friday... 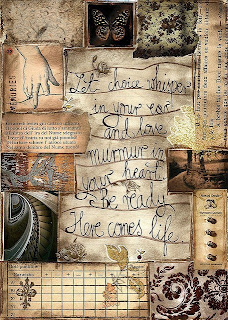 Well what have I become!  Yesterday afternoon whilst walking Alfie, it started to rain and normally I’d just continue and get wet but no instead I ran home as fast as my little legs would carry me – why?  Because my washing was on the line ;-) Nooooo I’m becoming domesticated and I think I actually like it!  Yep was chuffed I managed to get two loads of washing dried yesterday, and despite Thursday being my busiest work day of the week, before I left on the morning I managed to change the bedding on both beds – it took exactly 20 minutes.  Who needs the gym or a Zumba class, I earned 9pp on my pedometer yesterday I did 24, 861 earning me 9pp (that’s the equivalent of half a bottle of wine!)  in 3 days of working, walking Alfie twice a day  and doing housework I’ve earned 27pp on my pedometer.  What makes it even better?  My house is actually tidyish and my kitchen is a pleasure to walk into, last night I slept in a lovely freshly made bed and my mom isn’t haven’t to do anything other than get better.
Yep this housework lark is as good as a workout, heck if I start doing the real cleaning stuff like polishing, window cleaning, washing skirting boards, that will burn even more calories.
The only thing I’ve got to get in check is the eating, I’ve not had the best week food wise and yesterday was no better other than breakfast which was delicious, soya yogurt, raw oats, pineapple and a spoon of lemon curd.  For my lunch I had spaghetti in tomato sauce, egg and gammon with a slice of bread and a bit of cheese – what the heck was I thinking.  Wait it gets worse!  I made mom spaghetti and egg on toast as I was leaving and the toast smelt so nice, I had a slice too!  Then when I left work because I just couldn’t be bothered I stopped at a chippy and had a donor meat & chip special, thank heavens that it was in a tray and there was probably the 14pp of chips which is supposed to be a portion.  Did it stop there, noooo, I stopped at the Tesco garage for petrol and there was a sandwich reduced – yep I had that too!
Having a head cold and feeling generally rubbish isn’t good but then eating the above is making it no better at all!  So today I promise to buy a salad bowl and eat it for my lunch to enjoy I get something green in my life.  I’m at a training day today and I’ve already decided that today’s not going to be a diet day because me and my bestie are going to get drunk later and have a meal deal curry from Sainsbury’s.   I will however  get back on it 100% from tomorrow morning, I’m doing a bit of leader coaching in the morning so I will get weighed in that meeting and then for a month me and my mate are going to go and get weighed in a meeting by another leader to get us back on track.
It appears a lot of my members didn’t have the best week diet wise last week, so I say we all draw a line under it and refocus, we’re only human and at least we’re all gorgeous so we’ve won half the battle, we just wanted to be a lighter version of gorgeousness and fabulousness now don’t we, and that takes a little effort.
If I can become a domestic goddess, I can lose a few pounds for sure!
Moms feeling a lot better in herself, she’s still in a lot of pain but I think if you can get your head in a good place, pain is much easier to handle.  I still have a snotty nose and I’ve had a lousy nights sleep thanks to the crazy mutt that is Alfie, last night he turned into a guard dog for some reason and barked at everything that walked or drove down our street!  I don’t know what that was all about, but it wasn’t impressive at all and it better not become a habit!
So today’s the day – the little darlings break up for six weeks, great joy ay ladies!  I’m all stocked up on lolly pops unfortunately they’re not the good ones that have Calpol in them ;)
Right I’ve got to get a wriggle on, I need to be 30 miles away by 9am! Got to walk Alfie first and be a little domestic ;)
Have a great day – YAY it’s Friday!
Posted by Bev at 6:45 am