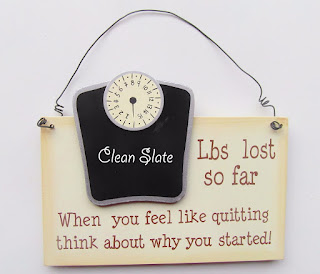 Now I know my Will Power is pretty lame on those days when I'm tired or just not in the mood, so those things on my "TO ACHIEVE" list get ignored, so this year I'm not relying on Will Power, instead I'm gonna throw in a dash of Won't Power, because I'm pretty good at writing a list of things I won't do!  This year though I'm going to make sure that list contains positive things, such as;

I won't hang out with or give my precious time to mood hoovers (you know those folk who enjoy being miserable!)

I won't carry on eating when I'm full!

I won't pile food on my plate, actually I'm going to buy 9in dinner plates to help with that one.

I won't put off the housework.

What I've realised is for me to lose weight successfully I need to break it down, I can't focus on the bigger picture, I need to focus on the 24 hours in front of me to start off.  I wasn't going to start till tomorrow when I'm back at work, but I've decided to start today instead.  And I shall be making daily resolutions rather than focusing on the year!

What made me realise this?  Well switching from ProPoints to SmartPoints means all the recipes on my website need re-pointing and that's a time-consuming task!  So what I've decided is I will do one a day rather than tackle them all at once, it occurred to me when I found a magazine recipe I'd wrote 10/10 on, I thought if I wrote that mark, it must be good and needs re-pointing and cooking again!  So I did and it only took a few minutes and that was with typing it up too, here it is;

Cook the pasta according to pack instructions.

Meanwhile, heat the oil in a large frying pan or wok and fry the squash and sage for 10-12 minutes or until golden and starting to soften, stirring regularly.  Add a splash of water if they start to stick.  Add the pine nuts and tomatoes and cook for 5 minutes more.

Drain the pasta and tip it back into the pan with the squash mixture and houmous.  Mix together and season with plenty of black pepper, then serve immediately with a green salad.

So that small act made me realise when you look at the bigger picture sometimes it can be overwhelming and off putting, whereas if you break it down into bite sized chunks, it's so much more doable, that goes for everything, not just weight loss, my house work for example, I could cry when I finally decide to have a go, but just doing 10-15 minutes at a time makes it easier to face.

So I've decided to start today even though I still have cheese and potato pie in the fridge, why?  Because I don't want to start this plan thinking food like that is a no-no, it isn't.  And no I don't know exactly the Smart Points in the dish but I can guestimate it pretty closely as I made it, I might not have the exact weights but it'll be thereabouts.  Oh and it'll be delicious with baked beans mmm, is it wrong to have that for breakfast ;)

- to track 100%,
- to find the smile moments
- to take my measurements for comparison later on
- to enjoy my cheese and potato pie
- To drink 3 pints of water (already don't one)

That's enough for one day!

So what's your plan, do you have one?  Whatever you decide, Happy New Year!  Focus on the healthy and the happy whenever you're able, smile a lot and be BeYOUtiful!