15th January 2016
Prove yourself to yourself, not others.

Just had me a lie-in so feeling refreshed, despite being woke up by Alfie at 3am to NOT go up the garden!  Yes I wouldn't mind if he wanted to go out but when I gave him the choice, he looked at me as if I was stupid, it had been snowing too so there wasn't a chance he was going out.

Well I've just weighed, another pound gone, giving me a total of 6lb in two weeks, I'll take that, I won't lie I was hoping for 2lb to give me the half stone, but it's a journey not a race and to help me with that race, a dear friend has given me a goal structure to work with, which I plan to share with my members next week.  This is mine;

It's telling me I've achieved two of the targets already, I'm now 1lb from my next target of 7lb, then 2lb after that from the next target of 5%, taking it one step at a time is making it doable.

Arrgggghhhhh, you wouldn't have noticed I disappeared for five minutes then, but I just knocked a pint of water all over my desk, drenching my paperwork, so now there is paperwork all over the place drying out!  Gotta love the universe for reminding me, I haven't meditated this morning because I got up later, so not to forget to do it at some point ;-)

Incredible weight losses at the scales again yesterday, I knew it was going to be a good one when my new member Amy who joined the week before, came in and said "I felt like I ate too much", then loses 9lb! BOOM!  That's when you know you've got a great plan and a member who's going to achieve her goal because she's chosen to eat the good stuff!  So that was how the day continued, a total of 356lb lost yesterday, to add to the 154lb lost at Ashmore Park, Wednesday night, the 77lb lost on Wednesday morning at Bloxwich, and of course the 202lb lost on Tuesday at Willenhall.  So we still have Saturday to add to the total but this week already an incredible, wait for it.....789lb, just WOW!  That's over 56 stone!  Ooo if you add my pound, it makes it 790lb, every ounce counts!

So I finished another week on track and within my allowance, and this week included wine, although I did have a couple of alcohol free days, loving a glass of tonic water at night with a slice of lemon in it.  We had cod for lunch yesterday, that was delicious and I had leftovers for tea, my breakfast was eggs on toast which has to be up there with my favourite food, I love eggs, actually could live on them, see I want eggs again now!

Well despite the snow, I'm hoping my bestie is gonna make it over here today so we can go have posh nosh, early birthday celebration.  Hoping for a stay same or a little loss next week with it being my birthday, I won't be going made the rest of the week so it should be do-able. 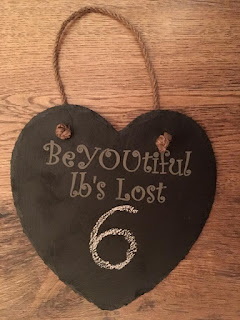 Oh I almost forgot, not only did I get a weight loss today, but I have a new slate weight loss plaque to keep a track of it on!  I was gifted the plaque and they will cost £6 if you're interested, you can order them, he's even going to make a £2 donation to my charity box for each one sold.

Then I got myself the best personalised ornament for my living room, how fantastic is this; 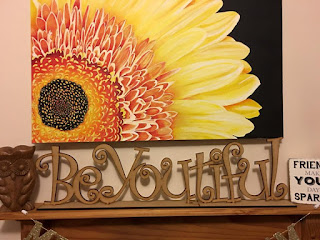 He can do them saying anything, my minds buzzing with ideas, I want slate signs for my garden and oooo, can't think now, too much to do.

Right I'm off, here's your Smart Point recipe of the day, I can recommend it, I've had it before and I do remember enjoying;
Creamy Mushroom Pork
Serves 4, 6sp per serving

Lightly coat a saucepan with low fat cooking spray and, when sizzling, add the mushrooms. Cook over a medium heat until the mushroom juices have evaporated, about 7 minutes.

Add the garlic and stock and boil for 3 minutes until reduced by about a third. Whisk in the low fat soft cheese and mustard. Remove from the heat.

Preheat the grill to medium and cook the pork steaks for 8-10 minutes, turning once, until golden and cooked through.

Warm the sauce and serve spooned over the steaks.

Serve with cooked courgettes for no additional points.