10th November 2013
The darkest nights produce the brightest stars…
Woke up to find I’d been tagged in a conversation on facebook about a food label and the ProPoints in it, this is the food; 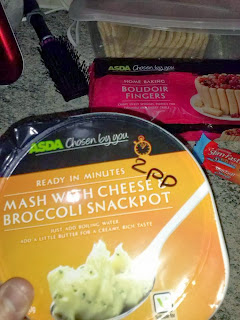 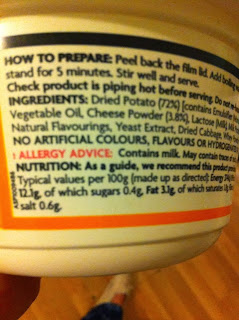 Nutritional labels do my nut in sometimes; they really don’t make it easy for folk to understand at all!  If a member buys a product types in the nutritional info per 100g then sees as in this example that the tub is only 58g, they get excited when the results come back as 2pp, UNFORTUNATELY the label also says (made up as directed), so the nutritional information has been worked out after the foods cooked weight not its raw weight.  To make matters worse the Weight Watcher app is also wrong so that really doesn’t help.  As I say to my members if it looks too good to be true it is too good to be true.  Always go by the label on the product but read the nutritional information correctly because it will make a difference, think about it, if you were to put the food in this tub on a plate I’m guessing there would be about 200g of mash there and it has cheese in it and oil if you look at the ingredients, potato is 2pp per 100g, cheese is 5pp per 40g and oil is 1pp per teaspoon so it wouldn’t be possible to get 200g of those ingredients combined to make 2pp.
Yesterday I went to a Weight Watcher meeting and enjoyed sitting & listening to the leader rather than being the leader talking, I’d gone to give Elle her star for her anniversary at goal, I’ve always given it to her in my meeting but now she works the same days as me she can’t make my meeting, so I went to her because 8 years at goal having lost 5 stone is a fantastic achievement and shows that not only does Weight Watchers work, it lasts too.  Now Elle won’t mind me telling you – that lady can EAT, you’ve never seen anything like it, I thought I could eat until I met Elle, so to keep her size ten waist with that appetite is a fantastic achievement and I’m very proud of her, first time I’ve seen her doing her ‘leader’ thing and she was great at that too.
I then went to do a bit of Christmas shopping and remembered there’s a reason I don’t do the ‘gift exchanging’ thing with adults at Christmas, it’s because it’s a very dangerous time of year for a spendoholic like myself who likes to see smiling people, so I would spend an absolute fortune and end up in debt, which is why I stopped doing it a long time ago, yes we restarted celebrating Christmas last year when we went away with friends and we’re doing it again this year but I’m only buying for the two kids otherwise I’ll defo
end up in debt!
I’m up at stupid o’clock again but we did have a really early night so all is good, it means I can get some paperwork done this morning too without it really interfering with the day because the night isn’t over yet :)
I’ve done two weeks on Filling & Healthy and boy am I ready to do a ProPoint day today, I need some cheese and chorizo in my life, or even a ready meal or two.  I love that you can mix the two on a daily basis, I love that I mostly eat F&H foods anyway so it isn’t difficult to swap and change.
Button update, a few went to Blackpool yesterday and walked a lot, a few went Christmas shopping, one did the weight loss wiggle in the changing rooms after getting in a smaller size and some socialised a lot last night, drinking, dancing, eating out – but all of them stayed on track.
Here’s to a super Sunday, Eat Gorgeous – BeYOUtiful and always take care of you. xx
Posted by Bev at 5:54 am