26th December 2012
The family. We were a strange little band of characters trudging through life sharing diseases and toothpaste, coveting one another's desserts, hiding shampoo, borrowing money, locking each other out of our rooms, inflicting pain and kissing to heal it in the same instant, loving, laughing, defending, and trying to figure out the common thread that bound us all together. ~Erma Bombeck
So Christmas it’s all done and dusted, this is my account of our day and what a fabulous one it was, hope yours was as good.  We all received lovely presents and over-indulged, although we didn’t really eat much after we’d had our main Christmas dinner.
Jen managed to play with every single present she’d received even if it was only for a few minutes each time, just leaving the last one where it was and moving one to the next, a trail of toys in her wake.
Will scooted round the large kitchen on his new scooter and I can now confirm this new super dooper one hurts your shins just as much (if not more) as the last one when you trip over it in the middle of the night!
Ian still only has two positions on this holiday – lying horizontal with his eyes shut or sat upright with a book in his hands.  He is the only person here who has no problem concentrating on a book and has already finished his first; I really struggle when there’s noise going on all the time.  Ian’s only job has been to empty the bins, he has his two servants to do everything else, I’m officially the Wyatt family au pair this year apparently ;-)
Lynne has developed a whole new image, normally obsessed about her hair she seems to have forgotten it’s even there and isn’t fussed that it’s a mess, although she did finally change out of her pyjamas yesterday into her jeans to try and curb her food intake – that didn’t work though she just undid the button!
Mom is still working her way through the thousand clue crossword and enjoying being waited on, and you know what after raising five of her own children and suffering a 30 year marriage to my dad, she deserves to be waited on hand and foot forever more.
As for me, well I did what I do every Christmas (actually I probably do it at least once a month) I burnt myself cooking the dinner, last year it was a baking tray burn across my chest, this year it was my hand, I picked up a very hot saucepan forgetting the handle was metal not heat proof plastic like mine at home!  To say it hurt is an understatement, so I stood with it under a cold tap whilst Lynne put the dinner out; apparently the Wyatt’s eat food castles!  And it was a very delicious food castle might I add, looked just like one you’d built in a Toby carvery when the plates aren’t big enough for all you want to put on them, so you proceed to make a mash potato wall to hold everything on, the stuffing ball goes inside the Yorkshire pudding then your peas are poured in the spaces left. Everything is piled on top of the meat to save valuable space and it means you have to eat everything else to get to the best bit, and then finally the gravy is poured inside the moat of mash and roasters.
So cooking Christmas dinner was a proper giggle, unlike most ladies out there we didn’t worry about whether it would turn out well because we believe if you throw gravy over it all no one notices any mistakes.   The turkey went in about 9am, we’d already had two bottles of Babycham each, so we only half read the instructions, we thought if we put it on low, covered in bacon then it’d be cooked by the time we’d done everything else.
What happened next probably wasn’t the best idea, I found the Christmas Day bottle of Sherry, and said “oh we haven’t had our Christmas Sherry yet” so that’s what we did, then we decided to see what it would taste like mixed with Babycham and drank the rest whilst we did the rest of the dinner.  The final outcome was delicious I have to say before you look at our photo of the turkey which looks uncannily like a sea creature!  It did mean the dogs got a leg each too.  As we were cutting it up we found a plastic bag of giblets!  We thought we’d removed everything but no, we’d only took half of the innards out – oops.   We also forgot to use the goose fat on our roasters that had cost £2,89 from their local butchers. 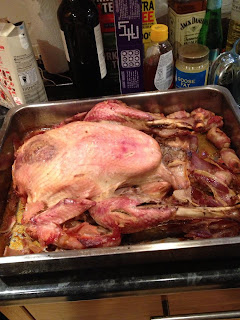 Anyway dancing round the kitchen with mom, Jen and Lynne was far more important than what ended up on our plate, but luckily it really was delicious, the cranberry sauce was amazing, (thank you Sharon for making it for us) and there were lots of empty plates at the end so it must have been good.
Whilst we were dancing and me and mom were singing, Lynne started mocking my dulcet tones and I said "I can sing really well, I'll have you know" her response "Well do it then!" Way too sharp for her own good that woman! ;-)

With Christmas hats from crackers pulled firmly on our heads Christmas dinner was complete, it had been a lovely day so far, the only thing missing was batteries! They'd been bought but we couldn't find them (we did eventually) but even that didn't cause any tantrums thankfully.

It's the first Christmas Day I haven't watched any television at all, I'm praying Dr Who has taped on my Sky box at home although I'm sure I can get it in my iPlayer.

Back to the festivities, Lynne and I walked the dogs on the afternoon, an hour of fresh air, both of us laughing and smiling, happy to be alive unlike some of the grumpy ones we walked passed. Ooo I forgot to mention the two young girls I'd seen on my morning walk riding their Christmas bikes in their pyjamas, lovely sight especially as the bikes still had giant gift tags hanging from them.

I saved my main gift for the kids till the afternoon, they thought they'd had everything so weren't expecting any more. Their little faces when they opened the tablets were previous, Will who isn't really demonstrative at all actually gave me a hug (just about - he almost proved it’s possible to hug someone without making physical contact!) and he said I'm so happy I think I might cry! Then he posted this on his Facebook page. And that my friends, is why giving will always be a far better experience for me than receiving. To see that look on anyone's face, especially a child's is a wonderful, especially as just lately he's more Kevin the teenager than cute kid. 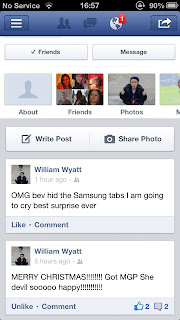 Lynne and I finished our day with a couple of glasses of Thorntons chocolate liqueur (very nice) and being told off by my mom for giggling like a pair of morons, she makes us feel like naughty teenagers again – it’s great!  Then I went to my bed at the same time as the kids, and passed out immediately, I was shattered - I had been awake since 4am don't forget.

Alfie's been a little restless the last two days, it turns out he's finally found out what his todger does other than weeing! Yep that was his Christmas present to himself!!!!!!! And a proper mess he did make!

Anyway moving swiftly on..... He wakes up in the night whenever anyone goes to the bathroom but settles back down after stomping round the wooden floor a few times. At 5am this morning though he starts whining and crying, I wasn't sure if it was anything to do with the fact Roxie is a girl and was downstairs or maybe he just needed the toilet so I took him to go up the garden. I had to go with him as he escaped the garden and ran off the day before. So it's 5am and absolutely pouring down and I'm standing up the garden in my pyjamas getting soaked whilst Alfie has a poo! You couldn't make this stuff up could you!

I'm now wide awake so settle on the settee with my duvet and my book, a dog either side of me and after about half hour I drop off only to be woken up at six by a beeping noise, I eventually track it down to a digital alarm clock you build yourself - one of Wills gifts! I give in trying to sleep and go to make a cup of tea thinking to myself yay peace and quiet, turned round and there stood Will ;). Happy days!

So I'm now walking along the coastal path, it's a beautiful part of the world Pembrokeshire and at this time of day, it's also very peaceful.   It also involves more DOG POO!  Roxie has just done hers and when I got there, I find about four piles and as I didn’t know which one was hers and it was on someone’s front garden, I’ve had to get them all up, so I’m now officially the poo collector too!

What fun will today bring.....

Enjoy yours, I will xxxx