The tide is high but we're holding on...


Learn to do things right and then do them right every time. Bob Knight

Was woken this morning by a very high tide, 5.6m according to the tide table, it gets later every morning, so we had a lie in till 7pm today, bonus, that means I had 10 hours!

Well I couldn’t resist the traditional turkey dinner, when I went to get the papers on boxing day, they had a turkey crown reduced from £20 to £8 so after smelling next doors on Christmas day, I decided carrying it down the cliff path would be worth the effort.  I did do it the lazy way though, readymade mash (reduced to 45p), Aunt Bessie roast potatoes, microwave sprouts, frozen peas and Yorkshire puddings and waitrose broccoli cheese and last but not least bisto turkey gravy and guess what – it was delicious!  Plus I only spent 20 minutes in the kitchen which is my idea of cooking. I think you’ll agree it does look too bad; 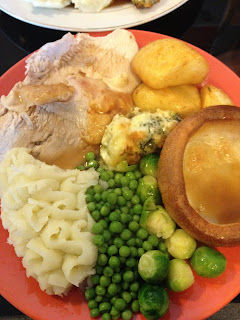 So I’ve noticed a few of you have started realising either you’ve had enough of overindulging because you feel bloated, have indigestion or heartburn or just feel pretty much like you’ve overdone it!  And a few of you have already started panicking about the damage you’ve done!


Stop stressing about it, it’ll come off we all know we can lose weight, it’s not like we haven’t done it before.


If however you’re not feeling so good after your overindulging then at least you’ll find getting back on track easier because you won’t want to continue feeling rotten.


I haven’t gone too crazy, I have enjoyed the odd biscuit and a couple of small bars of galaxy, I’ve drunk a lot of wine as you can imagine but I’m hoping the damage won’t be too bad!  Plus I’ve been a bit active which really helps.


Yesterday when I went to get the papers, Alfie refused to walk up the hill with me, so I told mom I’d be gone a while because I wanted to go explore.  I was exploring for 2 hours, I walked to the top of the cliff then ran along the Coast Path to Rame Head and back, which was 6 miles total and a lot of up and down the cliff. I’ll admit I walked up the really steep sections, and I also stopped to take the occasional photo but I was still out and moving and sweating and hopefully burning off some of that excess, even at moderate intensity it would have earned me 9pp, at high that would have been 22p!


I also walked Alfie on the beach a couple of times so that’s another hour or tea of low intensity activity.  We’re sleeping well as you can imagine, even with the noise of the bashing up the outside of the building.


I’ve realised that trailing running is my thing, I just love it.  I’m not about speed or distance as long as I’m moving that’s all that matters, and I find road running can be monotonous but running along a country path or better still a coastal path is what makes me buzz, I love the scenery, I enjoy the thrill of what’s round the corner and being in nature is just fabulous, yesterday I spooked two deer and watched them run away and also ran through a field of Dartmouth Ponies, you don’t see none of that in the gym ;-)


I know I can’t run along a coast path every day, but I can take a drive somewhere in the countryside once a week to run and use the 30minute run round the estate in the week as training.   So that’s my plan for next year.


I enjoy the way I feel whilst doing it, and the buzz afterwards, so I’m going to start making the effort to get in my car and drive, and if I continue to improve my eating habits too, hell maybe I can be fitter at 42 than I was at 32!


So what’s your plan, and I’m not talking resolutions because this isn’t something you’ve just decided to do, so how do you plan to get back on track.
I intend to use some of the spare time I have over the next few days to put together a week of meal plans to get me through my busy January, if you’re sat round bored why don’t you do the same.  Things are always easier if you think about it and plan.  When you don’t think things through beforehand and you don’t think about the consequences of what you do, that’s when you get in trouble, just like Alfie has over the last few days, he’s been stuck on a 20ft high rock and not able to get down and twice he’s nearly drowned chasing a seagull who flew over the sea and Alfie forgot he can’t run on water!
So use your spare time, make your plans, think about the consequences – don’t be an Alfie and end up saying “oh no” afterwards ;)
Enjoy your day.  I plan to xx 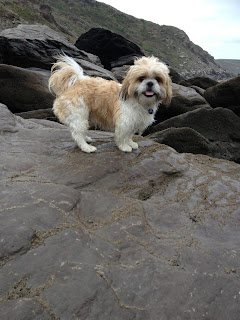 'Alfie on the rocks', way more likely than 'Bev on the wagon'!