Misery loves a bit of company, but I'd rather be a loner!

13th March 2013
Good looks fade, but a good heart keeps you beautiful forever.
Well my Carbonara style dish was delicious, I decided to omit the ham and make it vegetarian plus I only cooked enough for one and it was really tasty and something I could cook quickly and easily when I’m not in the mood.
Speedy Spaghetti Carbonara
Serves 1, 12pp per serving
(3pp on F&H day for parmesan cheese & olives – oil from allowance)
takes 15 minutes
60 g Wholewheat Spaghetti (6pp)
Cooking oil spray (1pp)
4 cloves garlic, finely chopped
1 medium egg, lightly beaten (2pp)
15g Parmesan Cheese, (2pp)
4 mushrooms, quartered
½ courgette, make ribbons using potato peeler
10 olives (1pp)
Salt & pepper to taste
Cook spaghetti according to instructions on packet.  Meanwhile, spray frying pan with oil and add garlic, mushrooms and courgette, fry for 2-3mins until lightly browned.  Set aside.
Drain spaghetti and add to mixture in the pan, add eggs and half parmesan cheese, season and toss together.  The heat from the spaghetti will partly cook the egg, but leave it moist. Serve and sprinkle with remaining parmesan. 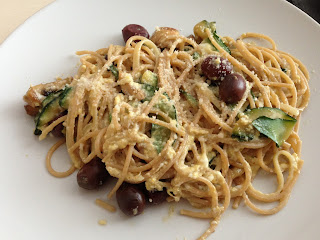 Definitely going in my new recipe folder.   I thought it was tasty and different from what I normally eat and so as usual I posted a photo of it on my Facebook only for someone to post this reply, “yuk looks disgusting”, well, what a negative reply, I don’t expect everyone to like what I eat at all but as my mom taught me, if you don’t have anything nice to say, don’t say anything at all.  Or they could have been a little more tactful, a simple comment about not being their thing or they didn’t fancy that one would have sufficed, it’s a good job I’m not sensitive isn’t it because I could’ve been really hurt by a comment like that.
Moms had a funny turn in the night but she’ll be okay, we think it may be low blood sugar and iron levels etc, but you know what she never dwells on it all, she’ll get up and get on with her day, she may occasionally worry about it for a while but doesn’t dwell for long. It’s all too easy to be full of doom and gloom isn’t it!  Even easier to be when you find yourself surrounded by negative people and negative thoughts it's no wonder staying positive can be a challenge for some, I’m so lucky to live in a house where we have a ‘sod it all & smile’ attitude. Have you noticed how your mood changes when you are around someone who is being negative – it’s like man flu, seriously bad for your health!  Plus it’s extremely catching, what’s that saying – misery loves company!
At Weight Watchers we talk about the toxic overloaded food environment, well the toxic overloaded moody environment is just as bad.  At the moment amongst other things, the weather is contributing to the negativity massively, and I’ve been guilty of that one myself, if I heard once on Monday, “Isn’t it cold”, I heard it a hundred times, I must have said it a dozen times myself!  We know, we can feel it; we don’t need to constantly remind each other of the temperature, crikey we even post it on facebook, my brother has posted the temperature every morning this week!   So now the negativity is viral, you don’t even have to be in the same room as them, it’s extremely contagious especially if you’re not aware of its effect on you.
So what can you do about it?  Fight back with positivity – good luck with that one because you’ve got to be strong to take on a miserable ;-) and unless you’re willing for a challenge - don’t bother.  Start with yourself is easier, when I find myself feeling negative or down, I focus on the good, I make myself a gratitude list, if you’re being grateful you don’t have the time or energy to complain or blame.  Plus you find it easier to cope with those that are being negative, or at least manage to ignore or avoid them.
If you’re losing weight but those around you aren’t helping or supporting you for whatever reason, they might just be negative people, they might be jealous  or they might not understand how important it is to you or how good it makes you feel, then you need to find people to spend time with who do understand and are positive about your success.  That’s why Weight Watchers works, because of the group support, because we all know in that meeting each week how much effort you’ve had to put in to get that weight loss you so wanted.
Remember you can walk away from the negative, you can put your fingers in your ears and sing, “la la la, I’m not listening’, and you don’t have to take on their problems and issues.
The best piece of advice I was ever given was, “if you’re not happy with something - change it”, I remember my response being, “It’s not that easy”, and the person continued to say ‘yes it is’ and argue the case for over an hour reducing me to tears!  That was roughly 9 years ago now and I thank them silently every time I think about that conversation because it’s true.
Some people like the struggle and misery, and want others around them to be the same way. But there is always a solution to any situation if only you look, it may not be the one you’d like but there’s always a choice. You don’t have to take on others problems and issues or share their misery. If someone cannot throw their negative energy onto you, they’ll throw it elsewhere don’t you worry, but elsewhere won’t be your problem.
I made a choice to limit negativity in my life or at least deflect it as best I can, there is no room for toxic people in my life, I have a small select group of friends and associates, they’re all allowed to have their moans and bad days but they’re not allowed to wallow forever. My life is but short and it’s worth being full of happiness and peace of mind. We all know someone who gives off negativity and bad energy. It is how you handle it that matters, you can either let it into your life or you can reject it by living a happy and grateful life.  I know which I’m doing!
Have a BeYouTiful positive day. Eat, Be & Live Gorgeous x
Posted by Bev at 6:42 am