Food & Friends, not much else really matters in my life! Oh yeah Wine of course ;-)

9th January 2013
Always be a first-rate version of yourself instead of a second-rate version of someone else. Judy Garland
Well I’m finally getting back into the cooking lark and yesterday I had my fantastic curry – yep I know self praise is no praise at all but who cares, it was delicious, I used 2 x Weight Watchers curry paste, 1 can chopped tomatoes, 250g x 10% fat mince beef, onion, carrot, courgette, (all diced) & chopped mushrooms.  Followed the instructions on the WW paste box then at the end threw in a bag of spinach.  I did add all the tomatoes because it looked a little dry and they’re zero ProPoints anyway.  The whole pan was 14pp so I ate a third of it with half packet of Tilda Lime and Coriander rice so my lunch was 9pp = bargain! 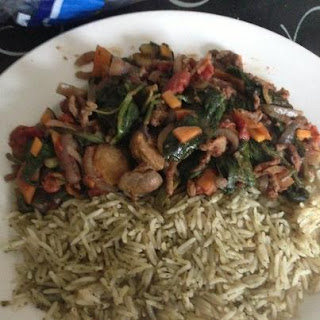 Then later because Alfie wouldn’t walk I decided to have half hour in the kitchen, I’d got a 1.4kg chicken that needed using, so I skinned it and cut it in four pieces, I ProPointed it at 32pp (after looking at all the different options on esource!) then I added a packet of Colman’s Chicken & Potato Roast which is only 1pp (bargain), 1kg potatoes (20pp) and 4tbsp vegetable oil (15pp), carrots & shallots.  I know a few of you will be looking at the addition of 4 tablespoons of oil in horror but fat is not the enemy, our bodies need a certain amount and it makes food taste better which means we’re satisfied more and are then likely to not overeat later.  For 16pp per person it turned out amazing! 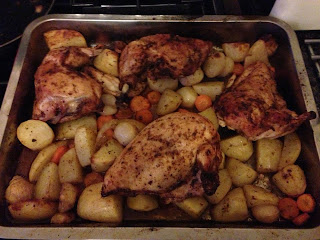 The recipe actually said to add chicken thighs and peppers but I didn’t have any and I might next time add half the quantity of potatoes and make the other half butternut squash, also replace the entire chicken with chicken breast a large one would only be 6pp each.  So yeah that recipe could be bought down in ProPoints easily, the one thing I wouldn’t leave out though is the oil, it’s what gave the meal it’s taste and that taste was truly nice.  So if instead of what I cooked I did this;
4 medium chicken breasts 165g 4pp each = 16pp (these aren’t huge, so when you can weigh food)
500g potato = 10pp
500g butternut squash = 0pp
3 carrots chopped into chunks = 0pp
3 onions chopped into chunks = 0pp
1 red & 1 yellow pepper = 0pp
4 tbsp oil = 15pp
Total = 41pp, Serves 4 people at 10pp each, just by changing slightly that meal has been reduced by 6pp per portion.  See how easy it is and trust me that sachet was delicious, I may experiment with it in the Actifry to see if the taste is as good without as much oil. 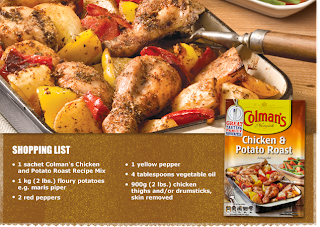 (this is the packet mix & their recipe)

The rest of my day was consumed by work, I’ve now seen all my meetings for the first time this year and it was wonderful to see everyone come back having had a great Christmas, and those that had overindulged were ok with the outcome.  Time now for us all to get on the losing streak, steady pound a week would be nice.
January is a very busy month for me for obvious reasons; I need to remember to save some time for me.  It’s my birthday soon and I usually let it pass without celebration because I’m just too tired to care, I’m thinking I don’t want to do that this year but whatever I do, I would like it to be effortless if that makes sense.  There are very few people in my life I trust 100% and that I believe really know the real me (all sides not just the nice bits) and accept me despite that!  I would like to spend it with them; I’m actually fancying something that will be fun, need to think about that!
Anyway back to busy!  Need to get my day started, lots to do ;-)
Have a fab day, not matter how busy you are, try to keep 5 minutes for yourself. xx
Posted by Bev at 7:05 am