Heart racing for all the wrong reasons! 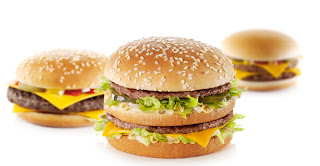 Jenny bought me back to reality, “Bev, why aren’t you getting married?”.
Gotta love kids ;-)
I am pretty good with controlling my eating these days, but I still get overexcited at times over food, especially when there are too many choices!  Do you?  Start to observe how you react in situations – it’s interesting to get to know yourself.
The best of it was when we got back with the food, my burger was coldish, so Alfie really enjoyed the meat from it, the chips were half and half.  It really wasn’t what I’d imagined!  Cured from MacDonalds for a while now I thinks! Da da da da da - NOT LUVIN IT!
Today I shall mostly be working and playing with my new Actifry that arrived yesterday, watch this space for feedback, have a tremendous Tuesday everyone. x
Posted by Bev at 6:57 am