Who would you be without your story?

1st September 2013
If the whole world was blind, how many people would you impress?
When I read that line the other day on a Facebook status, I loved it, it instantly made me smile because I believe my appearance makes no real difference to what most people think of me!  Maybe I’m wrong maybe it does matter to a certain extent, maybe I wouldn’t motivate so many people to lose weight if I looked differently, I’ll never know for sure, what I do know is that I have looked differently over the last 10 years and I don’t think it’s made too much difference to my success in either my work or my life, I’d like to think people like / listen / learn from me because of my passion, personality, knowledge and beliefs not because of my weight or appearance!  I’ll never truly know because let’s be honest what other people think of us is really none of our business!
We all assume certain things don’t you think, who would we be without those stories we ‘make up’ in our heads, we all do it, we make assumptions and/or judgements about things and but together our own version of events over a situation or what we believe is the case.
Yesterday I was shopping in Sainsbury’s and I’m a people watcher I admit, there was a man and his son doing some shopping, he couldn’t find anything on his list, his son was walking backwards with the trolley and dad kept saying, “watch were you’re going”, the boy asked the shop assistant where a certain make of crisp was and she showed him, myself and the assistant shared a smile and I said, “the dad wasn’t asking, men don’t ask do they, he’d rather buy a map and find it himself”, and we giggled, we weren’t being horrible, we were joking.  I was impressed he was doing the shopping to be honest!  The next time I saw them was in the wine aisle (now this is my territory) he was frantically looking for a specific wine and having no look at all, so I asked him, “which wine are you looking for”, he didn’t know what it was called, it was his wife’s favourite, I asked if he knew what country it was from, he said no, he then told me they had the white version, so I got him to show me that one, which was Italian, so we went to the Italian section and found it, he looked and said, “Oh it was on offer last week”, I replied, “you’re wife can’t have it this week then” and smiled, he then replied, “Oh no, it’s not for her, I lost her to cancer at the beginning of the month”.  OUCH! I gave him a half smile, said “Oh I’m sorry”, and left it there.  So there was me making my own story in my head, I’d got him down as a bloke who was doing the shopping for his wife and not enjoying it one little bit, when in fact he was a man in mourning trying to cope with the everyday reality of life, actually even that might not be true because I don’t know his story, I’m just making assumptions.
We just never know what’s going on in someone else’s world do we, it’s so easy to think you do, but sometimes maybe it’s best to actually ask because assuming, obviously I don’t mean random strangers in the street, more your close friends and family or people you work with. 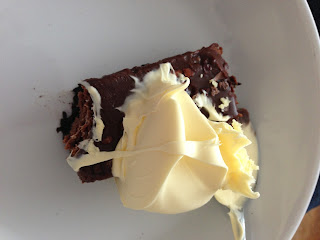 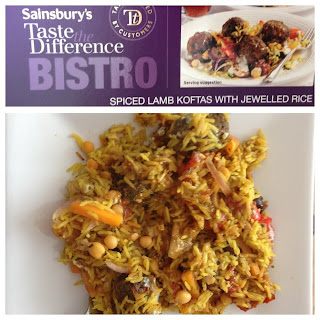 Lightening the mood, yesterday I chilled again, Jen didn’t want to bake so I shall do that this morning, we had a delicious meal deal for lunch from Sainsbury’s only 14pp for a portion of Spiced Lamb Koftas with Jewelled rice,  and I indulged in the brownie desert too that came with it, we split two portions three ways so with a bit of clotted cream, it was 11pp a portion, I’d skipped breakfast so at least had those ProPoints to use, the rest of the day I ate Weight Watcher crackers with cheese on and I finished that damn jar of peanut butter, and that’s why it shouldn’t have been in my house to start with, that jar had 63pp total in it and I’ve eaten it since Wednesday!  Sorting your surroundings is key to long term weight loss success and it’s what we’re going to look at in next weeks meeting, I shall not be buying peanut butter again until Christmas! 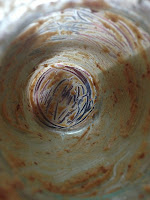 We can safely say I am overdrawn on the ProPoints front!  I am still focusing on the healthy and happy though and that’s my priority.
I’m now thinking mmm baking Muffins and flapjacks in a house with only two people, is that really a good idea?  We all know how that story is going to end don’t we – no assumptions necessary!
Need to think about that don’t I as I do believe that is why I don’t do baking because someone has got to eat the end product.
On that note, I’m off to walk Alfie, have a great day & Eat Gorgeous. xx
Posted by Bev at 7:43 am