My eyes unfortunately AREN'T bigger than my belly!

21st September 2013
Being successful doesn’t necessarily make you great. What makes you great is when you reach back and help somebody else become great. — Joel Osteen
You know the Filling & Healthy plan isn’t for you if you wake up thinking, “If I do F&H today I can eat LOADS!”
Yesterday was such fun and also very enlightening where food/dieting is concerned for me and my bestie, we met for lunch, we were early and sat on the car park waiting for the pub to open, apparently they don’t open till noon, we had chatter to catch up on didn’t they realise.  We were glad we didn’t go straight in though because we sat in the car watching the world go by and even though it’s naughty a lot of giggling was done as a school of girls run by doing their ‘cross country’, memories were remembered of the times we did similar runs, but also watching the different running styles – oh my days!  My running style was always something I was conscious of because there’s nothing funnier than someone who runs like a special person!  Watching these young girls on the verge of being women trying to run like kids but some having to hold their boobs because they hadn’t got decent sports bra’s and frankly they had larger breasts than I’ve ever hand was entertaining for all the wrong reasons when you’re sat in your car with your mate and being silly!
What wasn’t so funny was how unhealthy some of them appeared to be!  And also we were thinking how we were surprised they were allowed to all run alone these days ‘safety’ and all that, but guess where the teacher was!  In a car two down from us, apparently the get followed in a car, I remember my gym teacher she ran with us!  What’s the world coming too ;)
So anyway back to the lunch, we sat down and if you recall I had intended to do F&H yesterday so I wouldn’t have to worry about PPing, I ordered gammon, chicken and the trimmings, knowing I’d be able to resist the chips because they’re never any good and if I had a jacket I’d want butter on it.  I ordered a side of ‘seasonal veg’ which frankly was a joke!   But this was the meal; 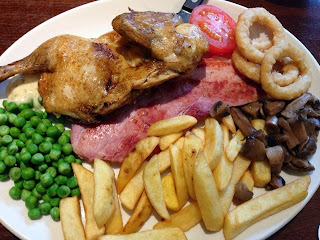 So using my ‘dieter’ head, I was thinking, gammon = F&H, chicken leg without skin = F&H, chicken breast without skin = F&H, peas, onions, mushrooms = F&H!
The reality, however you try to work it, or play the system, there’s 50pp of food on that plate!  So even if you’re going to ‘cheat’ the system and say try to work out the PP for the skin, or take the skin off, there’s still any oil that was used in the cooking of it and the tartare sauce I added!
I didn’t eat it all, I did leave the chips, an onion ring (I only ate the other 2 because they were their – not that nice), a bit of chicken and gammon, but I still ate about 35pp worth easily!
So I won’t be recording yesterday as a F&H day, I’ll be teaching myself a valuable lesson and that is as I told all my members in the meeting this week.  Make the plan work for you, make weight loss as easy as possible – don’t even try to test your willpower because chances are, you haven’t got much if any around foods you adore and you’re likely to fail!  I knew when I ordered that meal yesterday it wasn’t the wisest choice, I just got seduced by the photo on the front of the menu, the fact it was part of the meal deal and the 25% discount text I’d been sent the night before!  What I should’ve done which was what I’d decided before getting there was had just gammon and chips, because I would’ve only eaten the gammon and the veggies, I could’ve asked them not to serve it with the onion rings then I wouldn’t have been tempted to eat them.  Yes I need to not test my eating out willpower – I have none!
Lesson learnt but lunch enjoyed, a fab giggle had, and worth using all my weeklies for ;) I’ll just have to be sensible from now till weigh day, haven’t totted up my day yet, but it won’t be too good, I had two mini bounty bars from a tub of celebrations at the Chi Rooms after my massage, I also had a chocolate snowball because mom left the open packet on the side in the kitchen – that’ll be the diet devil testing me again!  Tea was a ham sandwich so not the end of the world!
Good job I’m doing a 15 mile sponsored walk today isn’t it!  Shame I’ve woken up with a bad throat but never mind, I’ll just take some painkillers and I’ll be ready to do battle with my boots J
Have a Sensational Saturday, the forecast is quite good.
Eat Gorgeous, BeYOUtiful & love yourself no matter what because you are amazing. xx
Posted by Bev at 8:35 am