16th February 2014
We have all known the long loneliness, and we have found that the answer is community. Dorothy Day
I have more than my weight to thank Weight Watchers for, so why have I been a continued Weight Watchers member since I was 18?

Because it was a place I felt like I was understood and I met people (some of whom became best friends) who had the same problems as me.  It was somewhere I learnt that it was okay to adore food, to not feel bad about wanting to overindulge and also to find out how to still do this yet lose weight (and eventually maintain) at the same time.  Over the years I’ve followed all the different plans that Weight Watchers has introduced - why did they change them?  To improve them of course, society changes, science progresses, they find out new things and adapt accordingly which means we end up with the best of the best plan there is and not forgetting that we like something new and different to focus on.  I can’t imagine trying to live on a 500 calorie a day diet now, yet I know I have done a very long time ago because I didn’t know no different, I didn’t realise it was unhealthy to do that and also that my body was clever enough to tell my brain it needed to eat which ultimately led to me overeating and doing the yo-yo diet thing!  Yeah I’m 44 now and just like the WW plans, I too have changed, I’ve matured, I’ve grown up, it’d be silly to expect myself to be the same person I was at 18 – heck I wouldn’t want to be, she was hard work!

The same goes for our activity levels, they’ve changed, we talked about moving more in meetings this week, discussed how many hours we spend sitting, when we were kids my mom had to walk us to school every day, that was a good 6 mile round trip twice a day – no car in our house, then she’d walk us all to town on a Saturday to get her weekly shopping, that’d be another 10 mile round trip pulling her trolley (which was always a Scottish tartan one, not pretty like these new ones!) and carrying her bags – we couldn’t afford the bus fare so walking it was.  Washing for mom was a day’s event in a twin tub; I even remember the mangle in the garden before the twin tub arrived!  No dishwashers, no mobile phones – the phone was in a red box at the end of the street!  And as for the television, it was black and white, 3 channels and I was the remote control, my dad would give me a kick and say which channel to put on!  Yes we were active in our day to day lives because we had no choice whereas now we can get everything done for us, there’s a person, machine or gadget for everything from turning the tv over to having your shopping delivered, no wonder we spend so much time sitting around!

We’d spend hours at the shops with mom because she’d chat to people, there was a real sense of community, these days with internet shopping – that’s disappearing and it’s really quite sad.  We’re social creatures, it is our nature to be so and our lives depend on other humans.  We need to interact and sitting at a pc on facebook isn’t the same as real face to face contact.  I had a lovely lunch with a friend yesterday and it was great to catch up with her, you can’t beat sitting catching up with each other’s lives and just chatting.

We had a delicious meal too, I like to try things I haven’t had before or for a long time, and yesterday I ordered,
Starter – pigeon breast, haggis potato cake & red wine jus
Main – braised rabbit leg, bacon, mushroom & onion cream sauce
Desert – panacotta and shortbread biscuit. 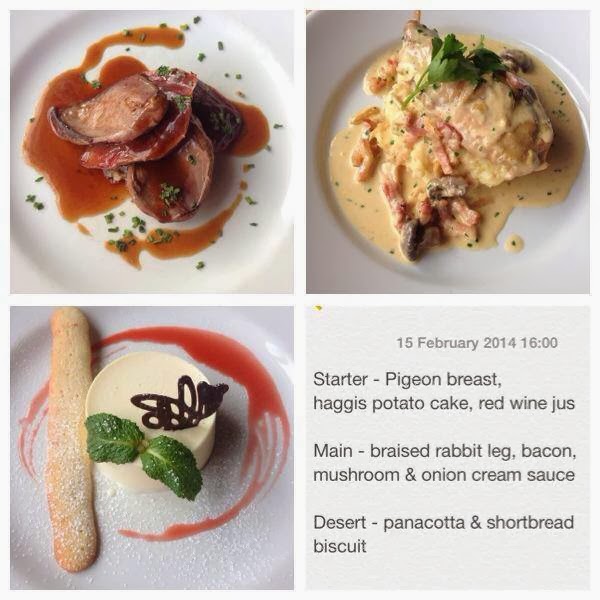 If I had to guess the ProPoints, the starter would be 10pp, the main 15pp and the desert 15pp – worth blowing the weeklies on that’s for sure!  Also I didn’t have anything else to eat after that.

My aim is to sit less, move more and socialise more, if you enjoy the day to dayness of life, it doesn’t seem such a rush all the time.  No I shan’t be buying a twin tub but I will start standing more in the kitchen and making my own food from scratch, if I want a cake or a nice crusty loaf instead of buying it I’ll make it – that’s not only moving more, it means I’m only using fresh, healthy ingredients.

I’m lucky that I get to socialise in my work, however I will be making more effort to get together with those great gang of friends I have too.

Happy Sunday BeYOUtiful, what are your plans today?