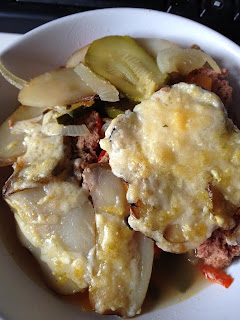 Getting up in the dark, not as much fun as waking up to a beautiful blue sky, it is however a sign that summers coming to a close and we have the last bank holiday of the year ahead of us.
Yesterday I cooked corned beef casserole, I layered thin slices of courgettes, carrots, onions, red pepper. A tin of corned beef (20pp), potatoes (9pp), and vegetable oxo cubes stock (1pp), cooked in oven covered in foil then removed foil to brown potatoes.  When cooked I topped with a little cheese (6pp), and the dish served 4 at 9pp each, really nice.
I was a bit of a rebel later though and went to the chip shop on the way home, the one at Ashmore Park, I only had a cone of chips even though for 30p I could have had a regular bag, tempting as that was I resisted.  When I got back I weighed them – 460g, which is a pound of chips and also is 32pp, now my helper had asked me how many chips in a handful, so I weighed them and worked that out and that was 8pp (of course that’s using my hands, so it would depending on the size of your hands!)  If you were to make them at home yourself they would be 24pp according to esource.  I did share them with my mom and there was plenty, but seriously one portion on esource is 165g, so there was almost three portions in that bag.  Plus how many of you would have had fish, kebab, roe, pie or similar with it!  A pukka steak and kidney pie is 13pp!
One of my members bought the hairy bikers recipe book in for me to look at, I’ve only seen a bit of it on tv but the one I say was when he cooked lasagne with leeks instead of pasta, interesting to find out if it is as nice as the photo.  So here’s the recipe folks, knock yourself out and let me know.
I’ve inputted the ingredients onto esource and it works out at 13pp a portion and serves 4.  I can honestly say I have cooked many a lasagne with pasta for less than those ProPoints, so don't be fooled, a couple can be found on my http://www.happyowls.co.uk/recipes.html website, and there are plenty in the cook books.  But if you fancy a pasta less one this is your recipe;

Who would have thought you could eat lasagne when on a diet? Well thanks to our amazingly clever recipe you can.   The pasta is replaced with sheets of blanched leeks so you can have all the deliciousness without the calorie count. 354 calories per portion.
Ingredients
Preparation method
Well it’s lightening up outside, I better get ready to walk Alfie, got a very, very busy day, still got a two cases to pack!
Posted by Bev at 6:50 am