Had ourselves a merry little Christmas....

26th December 2013
Gifts of time and love are surely the basic ingredients of a truly merry Christmas.  Peg Bracken.
Hope you all had a fabulous Christmas day, we most certainly did, the Wyatts arrived Christmas Eve about 5pm, I’d just got back from walking Alfie, he does seem to enjoy walking around this place more so than anywhere else we’ve stayed in Wales so that’s a bonus.  He also kept looking, longingly at the sheep as if to tell me that was what he’d quite like as his Christmas present.
As there wasn’t much on the tele, Jen played a music cd to us of tunes she has to learn for a concert she’s taking part in at the LG arena in January, Will made me smile when “something inside so strong” came one, he asked, “Is this Bob Marley?” I told him no it was Labi Siffre and as if he knew who Bob Marley was, his reply, “Yeah – every little thing”, and that was it, explanation complete ;)
Christmas Eve was a quiet affair, everyone tired, mom and I had been up since about 3am thanks to the storm and the Wyatts had been stuck in a car for a good five hours thanks to the traffic and the weather whilst we’d not been able to settle waiting for them to arrive because we were aware of how bad that weather was and had been.
Of course it took forever to get the kids to go to sleep, so poor Lynne was left up waiting on her own to let Santa in on her own because we don’t have a chimney and the rest of the grownups wanted to sleep but the kids didn’t!
I woke early Christmas morning, no one else did!  I was a bit more contained than last year – I must be growing up; it was a good hour before anyone else woke up and even longer before the kids surfaced, they’d stayed awake so late the night before we decided it best to leave them – cranky kids by Christmas lunch because they’re tired isn’t a good thing.
I decided to start thinking about getting the dinner prepared, we needed to improve on our turkey this year as last year it looked like a crab according to Will and Jen as they’d done impressions of the turkey the night before!   Lynne and I don’t take cooking Christmas dinner seriously at all, it’s just a roast dinner at the end of the day and we both agree it has two chances, it’ll taste great or it won’t.  Cooking a turkey, joint of beef, roasters, parsnips, Yorkshires in an oven with one shelf only was going to be fun anyway so stressing over it wouldn’t have helped.
Eventually the kids woke up, apparently they’d been awake half hour in their bedrooms not realising we were up, so they went to wake Ian up and the fun part began.  Presents were ripped open in a hurry as always and lots of smiles of their faces which was lovely, mom bless her got to enjoy her Christmas gifts more than once because of her memory, “who’s it this, it’s nice isn’t it and my favourite colour!”, priceless moments like that are ;).  Will attempted to wear every item of clothing he’d been bought all at the same time.
When Jen opened one of her presents to discover it was a set of hair crimpers, she said, “great a present that I can burn myself with”, that kids far too quick witted for her own good.
Once all the presents were open, Jen and her dad took over the dinner table with her lego and Will disappeared with his new phone, good job we weren’t planning on making a fuss of laying the table as we’d never have shifted Jen and her Moshi Monsters and Lego Friends!
Lynne and I decided it was time to open the Champagne, we’d bought a bottle because she’d actually never tried it before, she also got a present as a gift so we were going to have plenty.  Apparently she likes it, I’m not a fan so opened myself a bottle of cava which was a gift from a friend and I mixed mine with orange juice whilst Lynne worked her way through almost 2 bottles, it would’ve been two bottles had we both not knocked our glasses over playing Tetris Jenga, at which I am rubbish I have to say, and Lynne is rather competitive!
Yes we’d sort of left Christmas dinner to fend for itself, whilst we played games with the kids, it still worked out just fine and actually tasted delicious, we managed with one shelf, cooked the beef first, then the turkey, then the roasters last, they couldn’t go in with the turkey as the shelf was only just about big enough to get the turkey in, luckily I’d bought a foil tray that could be squashed to fit it in!   I did cook in all in my new apron made for me by a lovely member, it’s has “Eat Gorgeous & BeYOUtiful” stitched on the front – how lovely is that! 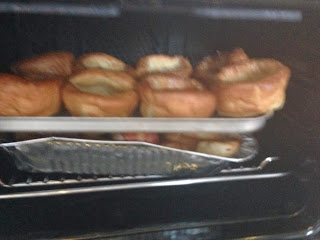 Had to stack the yorkies at the end! 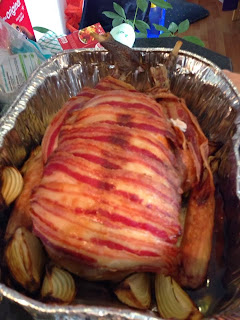 Turkey survived this year tho!  Compared to last years which looked like this; 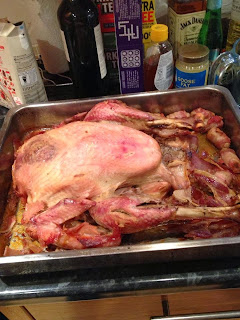 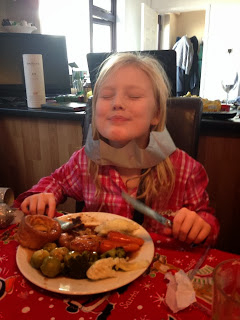 As you can see Jen approved, she always wears her Christmas hat like that! 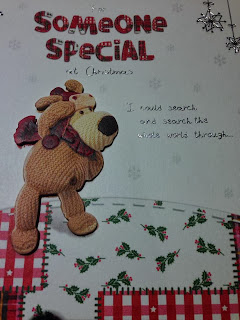 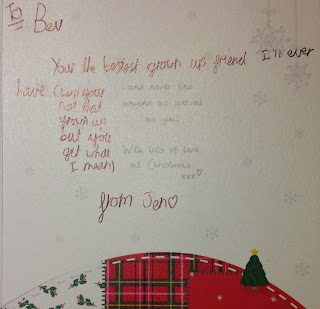 This was the lovely card I received from the lovely Jen, if you can't read it, it says, "Your the bestest grown up friend I'll ever have (well your not that grown up but you get what I mean) from Jen.
The plates in the cottage may have been small but it didn’t stop us feeling super stuffed after we’d eaten, we couldn’t manage pudding so that’ll be a treat to eat maybe today as it’s a home made one by the same amazing lady who gave me the Cava, and her cranberry sauces went down well too.
I did smile at facebook posts sharing their Christmas’s with each other, and the best Christmas facebook message I received came from one of my BeYOUtiful members who obviously knows me well, it said, “Happy Christmas Bev and don’t forget to eat in between your drinks xx”  Proper made me giggle that did.
Christmas afternoon and the main event is complete, presents have been opened, dinner has been eaten and everyone’s sitting chilling.  It’s a bit of an anti-climax don’t you think and the kids have been that hyper for the last 24 hours, they suddenly get deflated.  It was then that Lynne and I disappeared to get the last of their presents which we had been hiding (stretches out the fun even longer).  Little Jen finally got her Furby which she told us once she had it that she thought Santa hadn’t been able to get her one but she didn’t like to say because she would seem ungrateful and could wait until her birthday.  Will was just over the moon and the rest of the day went by in a whirl.
Another successful Christmas day in the bag, now for Boxing Day....
It’s silent in the cottage except for the sound of me tapping the computer keys, at last the weather has calmed down a little, I even managed an afternoon stroll with the dogs yesterday without being blown away; we didn’t go far though as I thought my stomach was going to burst!
There’s enough leftovers to make another dinner, or maybe bubble and squeak mmm, today will be involving Cheese and Biscuits at some point, Lynne and I have planned to have that for a meal and I shall be eating mine with a very fine wine that my bestie treated me too and also a 10 year old bottle of port that little Jen bought me, she chose this particular bottle because it was a “Tawny Port” and she knows how much I like owls – clever girl.
95% of my gifts came in a bottle for some reason ;-) luckily for me, there is absolutely nothing I want – I can honestly say seeing how happy the kids were with their gifts was the best present I could receive.  It was a lovely day and I hope yours was too.
ProPoints consumed?  Who cares!  It’s not what you eat at Christmas that matters it’s what you eat the rest of the year.
Eat Gorgeous & BeYOUtiful and have a brilliant Boxing Day.
Posted by Bev at 8:27 am