Surrounded by BeYOUtiful people I am!


6th March 2016
Every accomplishment begins with the decision to try. 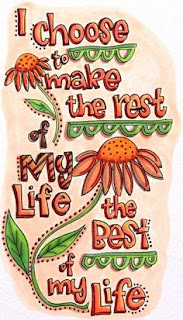 Well WOW, what a fabulous morning yesterday was, we are now all automated on a Saturday morning and my incredible members were patient, my helpers were amazing and my boss was awesome running back and forth making sure we all knew what we were doing and helping us when it didn't do what we wanted it to do.  Of course once all the weighing and automation was done, we then had a fabulous chat, yeah it's more a chat than a meeting, everyone gets involved and we support each other, acknowledge our achievements, discuss our challenges and generally get ourselves ready to tackle another week on track.  It was fabulous!

I went home and got my paperwork done so that I can have a completely Weight Watcher free day today with my mom, we shall do whatever she wants to do, if that's sitting in front of the tele, so be it, or if she fancies a drive out, that'll do too.  It's completely 100% up to her, she'll not be lifting a finger today, cups of tea etc will all be waitress service :)

I had a lovely afternoon yesterday too, I had my massage, then came home and cooked a lovely gammon, mash and veg dinner, the gammon was only 4sp (think it was from Lidls, I used the nutritional info on packet) it was smaller than those huge ones you can buy, made me realise how we are so guided by what we are sold or served.  If I'd bought a different packet from a different store, some of them are two or three times the size, mine was under 6oz whereas in Harvester you'd be served one that's 12oz - twice the size!  Danepak do one that 6sp, so that's obviously a little bigger than the one I ate.  It's why I always check, so I know exactly what I'm eating and not pretending it's whatever I want it to be.

The rest of my day was chilled and lovely and I fell asleep in my chair - perfect day.

It's been a mixed week, full of emotions but it's ending with good ones and that's all that matters.  One moment has stuck in my mind and reminded me of how quick people are to judge and have an opinion on someone else's life, it saddens me that people do this.  So there she is in a supermarket with a 2 year old that's throwing a massive tantrum - you'll all seen this happen, heck it might have been your 2 year old you were watching do it, and you thinking "stop it!" The last thing you need is someone saying "he needs a slap" under your breathe is not what you need in that moment!  Yes he might just be acting up, a little brat (again aren't there plenty of 2 year olds that go through that, don't they call them the terrible two's!) or he might be really poorly, or have autism and struggles to cope in different situations.  You just don't know other peoples stories so deciding in your head that she's obviously a bad parent and/or he's a little brat really isn't what you should be doing.  It reminded me of a story about a woman on a train coming home from work, tired after a hell of a day and all she wanted was a quiet journey home.  A man got on with 5 kids who were just being crazy, swinging on the rails, playing up, being loud and he just sat there and let them.  She sat there thinking for god sake man tell them to be calm down, after a few minutes she thought he'll tell them to be quiet in a minute, what is wrong with the man, doesn't he know how to control his kids.  As you can imagine as the time went on she got angrier and angrier and in the end she said, "Excuse me but can you please control your children, do you not care that they are disturbing everyone on the train", he looked up from the floor, he was crying, and he said, "I'm so sorry, their mother has just died, we've just come from the hospital and I just don't know what to do next".   You can imagine how she felt!

Remember we never know what's going on in someone else's life, so instead of thinking the worse, use the alternate story technique, it’s the secret to never getting wound up again by someone else.  Just for a second imagine other reasons.  If someone drives down the street and splashes you with their car by driving through a puddle, instead of thinking  “OMG, what a jerk!”  think of the alternative reasons that may have just happened, it's possible that he was rushing off to hospital because his mother had fallen ill or one of his children has been hurt or he was a doctor and there was an emergency he needed to get to, to treat a patient.

So yes it’s possible that he was a jerk but there are also numerous other explanations for why he was speeding the way he was and driving so erratically and you really can’t be sure of any of them but by creating an alternative story that says he’s not a jerk you’re activating the compassion that’s inside of you which is a more fulfilling approach and certainly one that aids you to let go of the situation, than the alternative which is that he’s a jerk and you'll get wound up!

On that note, I'll leave you with a Smart Point recipe and say go be nice to everyone today, not just your mother - that includes you too, be nice to you BeYOUtiful.

Cook the potatoes in lightly salted boiling water for about 15 minutes, until tender.

Put the potatoes and spinach into one dish; the leek and pepper mixture into a second dish and the broccoli and cauliflower into a third dish. Season with black pepper.

Preheat a medium-hot grill. Sprinkle the cheese over the vegetables, and grill for 4-5 minutes until bubbling and golden. Serve at once.