23rd May 2013
Life inflicts the same setbacks and tragedies on the optimist as on the pessimist, but the optimist weathers them better. Martin Seligman. 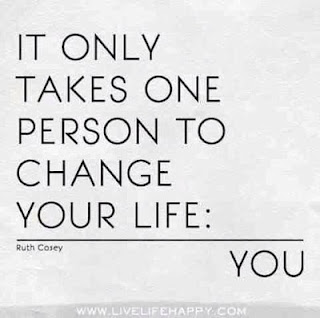 Yesterday was a busy day, from 9am till 8.15pm I spend 90 minutes in the house, so my normal eating routine didn’t go to plan.  Instead I had a cheese and beetroot sandwich for lunch and crumpets for tea, I also indulged in the new Weight Watcher peanut bars when they arrived!  So my Tandoori Paneer Biryani will have to wait, if I get chance I’ll make it today if not tomorrow.  Now I did know I was going to be out and about all day but I didn’t think to plan my lunch, so when I got back at 3pm I was absolutely ravenous which doesn’t bode well for eating plans.
A lady who did plan is a member from last night, she sent me this email which impressed me and hopefully will give you all something to think about too;
I just thought I would share something with you about my weekend which I think demonstrates the power of a) tracking, and b) having a goal to work towards.  My mother in law who's 84 moved house on Saturday. She hasn't been well and so all the family worked together to get it done whilst she was whisked away to spend the day with her great-grandson. Now of course I knew that the day was likely to be long and chaotic so - remembering that planning is everything with weight loss control - I made myself a food box for the day. This was so I wouldn't be tempted to just shove anything in my mouth the moment I got hungry, but would have some healthy, pointed options to hand instead. I was really pleased with myself (but as they say, pride comes before a fall.....).
During the course of the morning, whilst packing up the remaining stuff at the old address I ate my zero pointed fruit selection (whilst all around were sending out for bacon, sausage and tomato butties etc) and a WW chocolate and orange snack bar (I really like them and they certainly fill a gap). We then moved on to the new address and started to unpack everything and, mid-afternoonish, I decided to eat what was left in my food box. This was when disaster struck as the box had quite obviously become the victim of someone's over-zealous rubbish-chucking and was nowhere to be found. I was ravenous by now after several hours of physical activity and coupled with exhaustion and the emotion of moving day; I crumbled and ate 2 chocolate mini doughnuts. Then a couple of hours later fish and chips were sent for and my loudly grumbling tummy insisted I indulge in a small portion of chips and a couple of spoonfuls of mushy peas. I could almost feel the failure as a physical pain so later on, whilst practically sofa-bound by aching muscles and fatigue, tried to blot it all out with a can of cider.
Now here's the thing: in days gone by this type of experience would have been the trigger to write the whole week off, think 'what's the point, I've failed anyway', stop tracking and wait until weigh day to start again. But thinking about the meeting last week and the importance of setting a realistic goal, I summoned up the courage to actually sit down and work out the points - someone famous once said 'feel the fear and do it anyway'! - and do you know it wasn't nearly as bad as I thought. Being honest about the blip, counting the pro-points and planning for the rest of the week has meant that here I am on weigh day still with 6 weekly points to use up as well as today's allowance. And keeping in mind my goal of getting to xxx stone or less (8.5lb to go) before I depart for Gran Canaria on 13th July somehow gave me the extra impetus to get back on track, and I'm so pleased now that I took the bull by the horns and did it.
So: here's what I've learnt from this experience:
·         Being honest pays off. Instead of assuming that I'd blown my points allowance I worked it out and was pleasantly surprised.
·         Even the best laid plans can go wrong - and sometimes you just have to accept that 'c’est la vie', shrug and start again.
·         Keeping a goal in mind can be a powerful motivator. But do make sure that the goal is SMART (Specific, Measurable, Achievable, Realistic, and Time-limited) to give yourself the best chance of success.
-----------
She has a point doesn’t she, my day ended on way more ProPoints than I expected, but I’ve totted them up and I’m back on it this morning, yesterday firmly swept under the rug.
He’s to a terrific Thursday full of mindful eating and a bit more vegetarian food. X
Have a great day, EatGorgeous & BeYouTiful.
Posted by Bev at 6:23 am